A Special Moment and Missed Opportunity 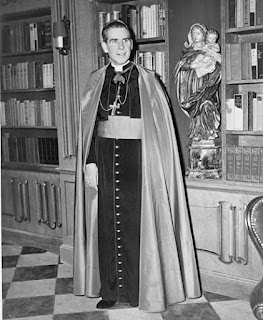 Exactly 70 years ago today, on February 12, 1952, speaking from a set in the Adelphi Theater on West 54th Street in New York City, the Venerable Fulton J. Sheen (1895-1979) premiered his new TV show Life Is Worth Living. It was a ground-breaking experiment in Roman Catholic outreach to the broader American society via the (then) new medium of television. Sheen's show won an Emmy in 1952 and ran until 1957, regularly drawing as many as 30 million viewers.

Sadly, I was not one of them. My family bought our first television set later that same year, several months after Sheen's premiere performance. But my parents preferred watching Milton Berle. The first time I ever recall seeing Sheen on TV was a special show he did on the occasion of the coronation of Pope Saint John XXIII in 1958. That said, even without me in the audience, Sheen's program was amazingly successful. It was the most high-profile pubic presentation of Catholic faith at the time, presenting it in a way which was resonant with the dramatically changing post-war national culture and the new style of religion that spoke to that culture. Thus, Will Herberg, in his classic Protestant, Catholic, Jew (Doubleday, 1955) famously saw Sheen as a major mediator of Roman Catholicism's new post-war status as part of "the national consensus as one of the three versions of the 'American Way of Life'."

TV was new in 1952. Sheen was not. He already had a reputation as a serious academic, a successful convert-maker, a famous preacher both in the pulpit and on NBC's weekly Sunday-night radio broadcast, The Catholic Hour. Television, however, made Sheen one of the primary representatives of American public religion. Sheen himself took particular satisfaction in how his program both improved the Church's public image and led to greater inter-religious understanding among Catholic and non-Catholic Americans. Yet, as Church Historian Mark S. Massa has noted  in Catholics and American Culture: Fulton Sheen, Dorothy Day, and the Notre Dame Football Team (Crossroads, 1999), "Sheen remained a committed devotee of Thomistic ultramontanism. Sheen never wavered in his firm faith that Catholicism provided the best - and very possibly the only - answer to the question of human existence." Thus, Sheen's seemingly "nondenominational 'inspirational' chats" in fact were "profoundly Catholic reflections on the cultural state of the American union," a "natural law Thomism" that "sounded not far from the up-beat, 'can do' spirituality just then claiming the American religious mainstream in books, movies, and state of the union addresses."

Likewise Conservative columnist Ross Douthat, in Bad Religion: How We Became a Nation of Heretics (Free Press, 2012), recalled Sheen as "a courtly and more intellectual version of Billy Graham," who like Graham was "turning the new mass media to Christian ends" and "understood his era perfectly," while arguing, as an American Catholic apologist, that the Catholic Church was "a better custodian of American values than many of its secular critics."

As so often happens, short-term personality conflicts trumped long-term interests, and Sheen eventually left Life Is Worth Living (and New York's most prominent pulpit) apparently as a result of opposition from New York's powerful Archbishop, Francis Cardinal Spellman. Then as now, we can only surmise how a more genuinely united American Catholic Church might have better navigated the severe stresses she would have to face.