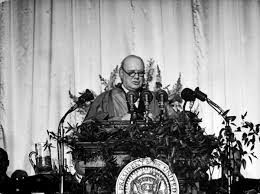 Militarily, the Russians may have most of the conventional advantage, but the heroic Ukrainian resistance is at least inflicting on the Russians a serious bloody nose. Good for them! Ukrainians know well, from their own recent history, what it means to be swallowed up by the Evil Empire, and they obviously want no part of it.!

Meanwhile, the U.S. and our European allies are responding - rather fitfully, hardly heroically, but at least (surprisingly) united and consistently. Sanctions and threats of more sanctions obviously did not deter Russian aggression, and it remains to be seen how united and consistent the U.S. and our European allies are going to remain. Both the U.S. and Europe (especially Europe) have gotten amazingly comfortable with the historically exceptional experience of relative effortless peace and security on the European continent.

There have, of course, been previous periods of relative peace and security in Europe - almost an entire century (with brief interruptions) from 1815 to 1914 - periods of peace maintained by conscious and careful efforts to enforce a salutary balance of power. Apart from the NATO expansion at the end of the last century (for which in retrospect we should all be very thankful), the predominant impression has been one of ahistorical fantasy - a fantasy that peace and security somehow can be guaranteed simply by imagining it to be natural instead of the consequence of hard work and effort. But preserving peace and maintaining a secure balance of power in a dangerous and easily disrupted world are never automatic and are never produced merely by imagination.

When I was a boy, back in the Cold War 1950s, my family frequently listened to the radio news at dinner time. I remember repeatedly hearing about the "iron curtain" and childishly trying to imagine how a curtain could be made of iron, and how horrible such a thing would have to be. In fact, of course, the iron curtain was a metaphor for a reality which truly was horribly evil.

There is nothing inherently inevitable about President Putin's personal commitment to re-establish that iron curtain in the form of a politically isolated, economically impoverished, and culturally repressive imperial enclave, historically and symbolically buttressed by a traditionally supportive and compliant Orthodox Church (always a more effective expression of Russian imperial imagination than the Communist Party was, whose Patriarch has just recently recalled the Russians' and Ukrainians' "common centuries-old history dating back to the Baptism of Rus by Prince St. Vladimir the Equal-to-the-Apostles.") Yet such seems to be the bleak future Putin is promising his people in Russia and whatever borderlands Russia can conquer.

So, once again, it falls to the U.S. and our (hopefully united) European allies to contain Russia's expansionist political aspirations and keep it isolated in its self-imposed, self-destructive cultural enclave, until in time, like its Soviet iteration, it implodes from its own inherent internal moral corruption.