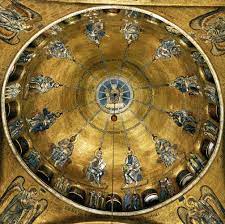 These nine days between the Ascension (the 40th day of Easter) and Pentecost (the 50th day of Easter) are traditionally focused on preparing the Church to recall the coming of the Holy Spirit. It is a time in which we are invited to identify our present situation with the uniquely formative experience of the early Church in the interval between the Ascension and Pentecost. Now as then, the life which originates in God the Father and has been revealed to us by God the Son, the Incarnate Word Jesus Christ, becomes fully ours through God the Holy Spirit, who operates in and through the Church. The Holy Spirit is inseparably connected with the life and eschatological mission of Jesus, whose presence and action the Spirit continues in the Church and in each individual Christian.

It was the second ecumenical council, the Council of Constantinople (381), which expanded Nicaea’s simple formula, I believe in the Holy Spirit, elaborating both on the Holy Spirit’s relationship with the Father and the Son and on his role in the history of salvation, the Lord, the giver of life, who has spoken through the prophets.

In the nineteenth century, Isaac Hecker (1819-1888) discerned the presence and action of the Holy Spirit in God’s providential care for him and identified his own inner aspirations and longings with the action of the indwelling Holy Spirit. After becoming Catholic in 1844, one of Hecker’s strikingly distinctive emphases - in his own personal spiritual life, in his reflections regarding the religious community he founded, and in his general spiritual teaching – was his personal devotion to the Holy Spirit and his desire to foster among the faithful an increased appreciation of and openness to the fundamental activity and inspiration of the Holy Spirit operating in the life of the Church and in each individual. Throughout his Catholic life, his unfailing commitment to the Church’s mission remained rooted in a deeply felt, intensely lived personal experience of the indwelling presence and action of the Holy Spirit:

An act of entire faith in the personal guidance of the Holy Spirit, and complete confidence in its action in all things – in its infinite love, wisdom, power; that it is under its influence and promptings up to now my life has been led. Though not clearly seen or known, He has directed every step. On this faith, on this principle, promised to act now and in time to come. To be above fear, doubt, hesitation, or timidity, but patient, obedient, and stable [From private memoranda made in Europe during his illness, 1874-1875].

Hecker was no systematic theologian and did not write as one. What he wrote was his personal appreciation of how the activity of the Holy Spirit is experienced in the Church and of the individual, ecclesial, and social effects which flow from openness to that divine activity.

It cannot be too deeply and firmly impressed on the mind that the Church is actuated by the instinct of the Holy Spirit, and to discern clearly its action, and to cooperate with it effectually, is the highest employment of our faculties, and at the same time the primary source of the greatest good to society … In accordance with the Sacred Scriptures, the Catholic Church teaches that the Holy Spirit is infused, with all his gifts, into our souls by the sacrament of baptism, and that without His actual prompting or inspiration, and aid, no thought or act or even wish, tending directly towards our true destiny, is possible [The Church and the Age, 1887].

In effect, Hecker posited three renewals: that of "the age" (the world, society), dependent on that of "religion" (the Church), itself inseparable from that of each individual soul:

Lest there be any ambiguity about how Hecker understood “a greater effusion of the Holy Spirit in the Church,” Hecker himself wrote to his colleague Augustine Hewit: I anticipate no special outpouring of the Holy Spirit – in the miraculous sense, no more than the present action, or the action of the Church in any age was miraculous. [February 13, 1875.] In this, Hecker was echoing Saint Thomas Aquinas: Nevertheless, we are not to look forward to a state wherein man is to possess the grace of the Holy Spirit more perfectly than he has possessed it hitherto. [Summa Theologiae, I-II, q. 106, art. 4].

It is this habitual grace of the Holy Spirit which is at the heart of the Church's life and which the church invites us to be especially attentive to during these final Easter days prior to Pentecost. And so the Church prays at Mass tomorrow: O God, whose Son, at his Ascension to the heavens, was pleased to promise the Holy Spirit to the Apostles, grant, we pray, that, just as they received manifold gifts of heavenly teaching, so on us, too, you may bestow spiritual gifts.