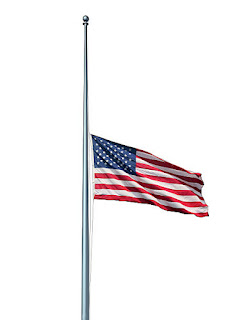 Unlike Commonwealth countries, the United States does not actually celebrate Remembrance Day (although November 11 remains a little-noted federal holiday under the title Veterans Day). The closest we really come to it is today, Memorial Day, which did in fact originate as a kind of post-Civil War American Remembrance Day. Since then, of course, Memorial Day's contemporary character as the first of the three outdoor summer-centric holidays - start-of-summer (Memorial Day), mid-summer (July 4), and end-of-summer (Labor Day) - has considerably altered Memorial Day's originally intended commemorative character. That character was perhaps more explicitly reflected in the holiday's original name, Decoration Day. (I am old enough to remember when some people still called it by that older name and put that name into practice by visiting cemeteries and decorating veterans' graves.)

It is to be expected that the traditional start of the American summer season will be accompanied by an even greater desire to return to "normal" (notwithstanding covid's widespread increase and spread and the increasing abnormality of our politics). That said, the holiday's call to remembrance remains relevant.

And, while it is always important to remember on this day those who have died in the service of our country, it has long been popular custom to remember others as well. At this tragic time in our troubled history, it seems especially right to remember, in addition to those who died in the service of our country, those who have died as victims of our country's moral and political dysfunction, for example, those students and teachers murdered at a Texas school last week and all the victims of gun violence. Our country suffers from many moral and political failings, but none seems so immediately pressing as our failure to do something about the scandalous plague of private gone ownership.

After the monstrous killings in Uvalde, Bishop Daniel Flores of Brownsville, TX, the Chairman of the U.S. Bishops’ Committee on Doctrine, commented that Americans “sacralize death’s instruments, and then are surprised that death uses them.” This American fetishization of guns is seen in the Republican party's widespread obsession with constantly increasing legal access to guns and poignantly illustrated especially in the performative gun displays associated with certain politicians' ads and even their Christmas cards. and, of course, there are the right-wing churches with their performative gun displays. Talk about sacralizing death's instruments!

Elaborating on his original statement, Bishop Flores added: "when I say 'sacralized,' I mean that we make it seem almost as if it detracts from human dignity, or the human good, simply to say that we need to have some reasonable limit on these things. To say something is sacralized is to say it’s almost taken out of any possibility for conversation. ... and I must say that in some sense, we have kind of sacralized the whole idea of the individual right, such that it trumps any communal concern."

Well said! At this tragic time in U.S. history, it is heartening to hear a shepherd who prioritizes the well-being of the sheep!

None of this is new, of course. The pathological American obsession with individual rights has long corrupted our politics and our social life. This is, indeed, "American exceptionalism," but an exceptionalism that blocks our capacity to learn from experience - unlike other countries which have restricted access to guns and hence minimized such traumatic tragedies. (It also, of course, blocks our capacity to learn from the classics. It was, after all, Thucydides in his History of the Peloponnesian War, who noted that the Athenians were the first to give up the habit of carrying weapons and to adopt a more civilized life-style. How long ago was that?)

Of course, there have been exceptions to our exceptionalism. Much as Americans obsessively love their cars, we require drivers to be of age and trained and licensed and impose all sorts of safety requirements on the cars themselves. Imagine if we required gun-owners to be older and suitably trained, etc., with at least as much seriousness as we already apply to drivers and driving? We have also radically transformed our approach to drunk-driving in my lifetime, as we have also changed our approach to and imposed all sorts of restrictions upon the vile practice of smoking, about which we were once likewise told that nothing could ever be done either.

But guns seem to be different. And, while the problem is bigger than the prevailing individualistic misinterpretation fo the Second Amendment, the Supreme Court's unfortunate 5-4 misinterpretation of the Second Amendment in 2008 in District of Columbia v. Heller has had a disastrous effect in further legitimizing the anti-social, individualistic mindset that has come to dominate contemporary American gun culture. Surely District of Columbia v. Heller has to count as one of the most catastrophic decisions of the U.S. Supreme Court in my lifetime.

That is why William Shapiro's recent proposal in The New Republic (May 26, 2022) deserves greater attention. "It is time for gun control advocates to start talking about life without a Second Amendment," he wrote. The idea that he is ultimately arguing for, "is to paint a portrait of an America of the future with sane gun laws and no need for active-shooter drills in elementary schools. Unless voters can aspire to a different America, gun control will never be a compelling single-issue cause."

Guns, of course, are a key component of the problem. Without guns, troubled teenagers and domestic terrorists would have a much harder time inflicting damage. Even so, without in any way letting gun owners off the hook here, our country also needs to address the ever growing crisis that seems particularly to plague so many young men in our society, who seem so lost and angry.

It is a traditional truism that it is not good for a community for its young males (or anyone else, for that matter) to be socially isolated and detached from the socializing benefits of family, work, and other social and communal networks of various sorts. And, while there have always been troubled teens and others on the margins, it does seem to be widely recognized that the contemporary breakdown of traditional socializing institutions has taken a particularly dangerous toll on many today, while the omnipresence of screens of all sorts seems to exacerbate such social isolation and the desperation isolation induces. Obviously, troubled 18-year olds like the alleged shooters in Buffalo and Uvalde shouldn't have access to guns, but the fact that so many are so troubled is itself a catastrophic crisis that warrants more attention and response.

A lot to think about on this Memorial Day!