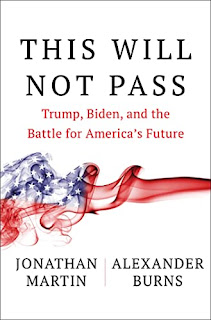 Historically, one-term presidents who have been defeated for re-election and lost control of Congress to the other party have not been popular party favorites. In this as in so many other things, Donald Trump has proved to be an exception retaining almost total control of the Republican party more than two hears into his post-presidency (or possible pre-presidency if he runs again and is re-elected in 2024). That alone is enough to explain the continued fascination with Trump as candidate and president, and the quantity (and high quality) of books about Trump and what we may well call this Trump-era in American politics.
The latest such effort is This Will Not Pass: Trump, Biden, and the Battle for America's Future (Simon and Schuster, 2022), by New York Times reporters Jonathan Martin and Alexander Burns, which was the talk of the town (that is, DC) and of the more politically oriented mainstream media in the run up to its publication earlier this month.
The book dramatically retells the now increasingly familiar story of the catastrophic final year of the dysfunctional Trump Administration and the halting and increasingly ineffective first year of the Biden Administration. Martin and Burns highlight how our problematic political system was devastatingly challenged by the coronavirus pandemic and the January 6 Trumpist insurrection, and Biden's thus far minimally successful supposed return to political normalcy.
By the authors' own account, they initially "envisioned a richly reported account of what was sure to be a memorable presidential campaign" - which they have given - but as they "lived through and covered the events of 2020, the extraordinary aftermath of the election and the tumultuous months since, it became clear" to them that this "crisis in American politics, in the years 2020 and 2021, deserved something more." So they crafted "a work of history—to capture the campaign yet also the equally important story of how the election and its violent conclusion shaped this country and its two political parties."
Posted by City Father