The Church in China 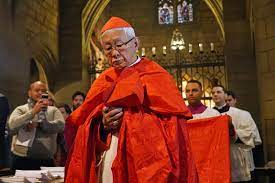 Since 2007, May 24 (traditionally the feast of Mary, Help of Christians) has been observed as a Day of Prayer for the Church in China. The recent arrest of 90-year old Cardinal Joseph Zen, who is the retired Bishop of Hong Kong, highlights the former British territory's increasing subjection to its Chinese communist government, 25 years after its abandonment by the U.K.

Cardinal Zen, called by some "the conscience of Hong Kong," is widely recognized around the world for his forthright defense of Chinese Catholics against the communist regime (and also for his reservations regarding a recent Vatican agreement with that oppressive government). Whatever else may be said or sayable about Cardinal Zen's arrest, it suggests ever more intense anti-Church militancy on the part of China's rulers.

The Vatican Press Office's somewhat weak response - “The Holy See has learned with concern the news of Cardinal Zen’s arrest and is following the evolution of the situation with extreme attention” - merely confirmed the widespread sense that China is definitely winning its long war with religion.

The actual details of the supposed agreement between the Holy See and the Chinese regime have never been made public. So it is impossible to analyze and evaluate it. Presumably, it recognizes a major role for the state in the appointment of Chinese bishops. But that in itself need not be seen as problematic. After all, civil rulers have played a prominent (sometimes predominant) part in the appointment of bishops for much of Church history.  When the newly independent United States indicated to the Holy See that it did not intend to play such a role, it was an exception to what was then the widespread practice. The more serious problem rather is the Chinese regime's long-standing hostility to religion and its desire to control and manipulate religion for ideological and political purposes, illustrated, for example, in the restrictions imposed on public worship and on the religious education of youth.

China is not the only state which directly or indirectly limits the Church's most fundamental freedoms, but it is the largest and most important of such states and hence poses an important challenge to the Church going forward.

The invocation Mary, Help of Christians, is an ancient one, dating back to Saint John Chrysostom. (I can remember how we prayed it - in its Latin form, Maria Auxilium Christianorum, ora pro nobis - when I was in high school in the early 1960s.) In 1815, Pope Pius VII, who was imprisoned by Napoleon from 1808 to 1814, established the feast of Our Lady, Help of Christians, to be celebrated annually on May 24, the day on which he returned to Rome after Napoleon's defeat and first abdication in 1814. In 2007, Pope Benedict XVI declared this day - so long associated with the Church's modern historical sufferings at the hands of governments - a Day of Prayer for the Church in China.