A Day in the Garden 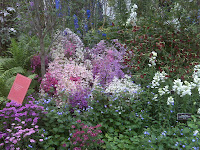 That’s the New York Botanical Garden, to be precise (formerly and more properly known as the Bronx Botanical Garden)!
I went there today – walking distance from my childhood home - as part of a parish outing to enjoy the beauty of the Botanical Garden’s justly famed outdoor gardens, plant and flower collections, conservatories, and uncut forest. We also went to take in the current special spring exhibit - Emily Dickenson’s Garden: The Poetry of Flowers.
Emily Dickinson (1830–1886), who lived a strange reclusive life with her family in Amherst, Massachusetts until she died of Bright's Disease on this day in 1886, was perhaps better known in her lifetime for her gardening than for her poems. Her poetry has long been a part of the American literary canon which was in fact (along with her other writings) significantly influenced by plants and flowers.
When I first encountered Emily's poetry in High School, I remember learning of her reclusiveness, but how much of a hermit she really was, or why, were beyond the borders of the curriculum. She obviously had direct regular contact with her family and, presumably, with the family's Irish servants, and she carried on a written correspondence with some 100 or so others. So she was hardly a hermit, but very definitely a recluse, living an oddly abnormal life. Over the years, her self-inflicted social isolation has been blamed (surprise!) on an early romatic disappointment. At least one mid-20th century author theorized a failed lesbian romance. Who knows? All such speculations could, of course, be true - or false. Either way, they reflect our contemporary desire to re-interpret people and events from the past to fit present preoccupations - an interest in reinforcing ideological obsessions and scoring political points.
Be all that as it may, it is a great exhibit, well worth the trip - as is the entire Botanical Garden itself. New York's Bronx Botanical Garden is a park, where people can go to enjoy being out-of-doors. It is a nature center, where people can experience the beauty of the natural world and actually learn a good deal about it. And it is a scientific research center, where serious scholarly study takes place. What a great thing to have this wonderful treasure as part of our city!
It was also one of those perfect spring days in the city when everyone was out.(Among the thousands of people there in the park today, I actually met other people I know!)
Posted by City Father