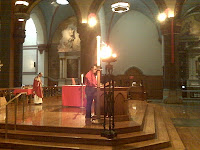 Today is Pentecost Sunday, “the Birthday of the Church.”