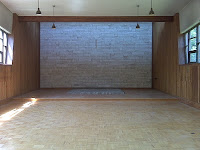 Today, Memorial Day, the Paulists from the New York City area concelebrated a Memorial Day Mass at the parish cemetery in Milton, NJ. That is the cemetery to which were transferred last year the bodies of the many Paulists who had previously rested in the Paulist cemetery at the Paulist Novitiate at Mount Paul, Oak Ridge, NJ. Their transfer to the local parish cemetery was necessitated by the perhaps inevitable, but no less sad for that reason, sale of the former novitiate property to the State.
After the Mass, we Paulists gathered for one last time at our old novitiate for a Memorial Day barbeque. Hosted by our new Vice President, Fr. Sean Foley, who has so expertly managed both the property and the transfer of bodies through this tragic time of transition, the barbeque was a wonderful celebration of Paulist community. It was, however, a bittersweet celebration, since it will likely be the last time most of us will ever set foot on that property, that special place where most of us once spent one of the most formative years of our lives. By now, the novitiate house itself has already been stripped of its furniture. (Note the attached picture of the novitiate chapel, which gives a whole new meaning to “bare ruined choirs.” Much of the chapel furniture – including altar, pews, and statues – has thankfully already found a new home now here at St. Paul the Apostle in New York).
I entered the Paulist Novitiate at Oak Ridge on August 24, 1981, and made my First Profession there on August 7, 1982. Subtracting the 2 months spent in another wonderful place since then also lost by the Paulists, the University Parish in Morgantown, WV, I spent 9+ months of my novitiate year at Oak Ridge. I understand that Mount Paul was not every Paulist’s favorite place, but it was certainly one of mine. In the late 1980s and early 1990s when I was at Good Shepherd and later working at 1011, I used to like to drive out to Oak Ridge on a day off to enjoy the company of the novices and the Paulist priests in residence – especially the late Jim Finley. After my ordination in 1995, I visited Mount Paul to celebrate Mass there, finally bringing my formations story to its belated but happy conclusion. I attended several Paulist burials there in the old cemetery and several First Professions – including the last one ever to take place there in August 1997. In recent years, I have gone there less often. With no novitiate there, the house seemed strangely empty – a place that seemed to have lost its purpose.
Transitions are always sad, and that was certainly how I felt today as memories (both pleasant and painful) flooded my mind and brought tears to my eyes. As we turn the last page and finally close the book that was the Paulist story at Mount Paul, I recall Isaac Hecker’s hope that, in psite of everything, we are indeed “living and working in the dawning light of an approaching, brighter, more glorious future for God’s Holy church.”
Posted by City Father