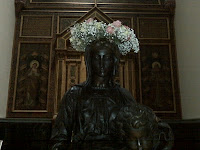 Yesterday after the Sunday 10:00 a.m. Mass, it was time for the parish’s annual “May Crowning” of the Statue of the Blessed Virgin Mary. In recent years, this popular tradition has been carried out on a weekday afternoon. This year, however, it was moved to a Sunday with much of the children’s religious education program present and the full panoply of musical and other embellishment only feasible in a Sunday celebration. Yesterday’s celebration was also heightened by the participation of a large visiting choir that had sung at the Mass and then gave a concert afterwards (part of the successful Visiting Voices at St. Paul’s program).
One acquaintance expressed to me his personal view that kings and queens are incomprehensible images for contemporary people. Besides noting the obvious political fact that there are still a good number of monarchies around in the world – at last count, Europe alone counted 8 states and 2 mini-states with a hereditary monarch at the head – I couldn’t resist asking my friend if he had learned any fairly tales growing up. (Since he is older than I , I am sure he must have heard all those familiar tales in his day, as I did). As such familiar stories certainly show, kings and queens are deeply embedded archetypical figures in our common human consciousness.
As a sometime political scientist, I would also observe that through most of human history few, if any, civic symbols have served so successfully at building, bonding, and unifying social communities as has the institution of kingship. In the institution of kingship, a particular person (whose whole identity is connected with this role) symbolically unites an entire community by a powerful personal bond – a bond so powerful precisely because so personal.
Luke’s Gospel identifies Jesus even before his birth with messianic significance of David’s kingship over Israel (Luke 1:32-33). Christian tradition and liturgy have honored Jesus as King - and by extension Mary as queen - with all the symbolic splendor & resonance that those titles convey.
How May Crowning originated and developed into a common Catholic custom I don’t really know. Clearly, however, it is a successful and popular custom, which resonates well with people. By its nature, a “coronation” highlights the grandeur and special significance of the person being crowned. At the same time, the traditional use of a floral crown in the customary May Crowning gives it a somewhat folksy character, which I suspect further endears it to people. All those themes coalesced quite vividly in yesterday’s celebration. I can only hope the experience may have helped overcome some of my friend’s curious qualms!
Posted by City Father