Thoughts Triggered by an Academic Event 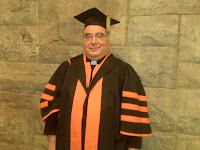 Officially representing the parish at the Marymount Baccalaureate event to be held at St. Paul’s this afternoon, I will be wearing my Doctoral Academic Gown for the first time in many years. (I had to fish it out of my closet and re-learn how to wear it and attach the hood correctly!). A fuller face and the clerical collar clearly identify the picture as 2010 - not 1977!

The orange-and-black color scheme may make it look like Halloween, but the orange stripes, etc., have serious historical significance. The orange represents the royal house of Orange (the currently still reigning house of the Netherlands) and recalls Prince William of Orange, the Dutch Stadholder and son-in-law of England’s King James II (James VII of Scotland), who in “the Glorious Revolution” of 1688 successfully invaded England (the last successful cross-channel invasion in that direction) with the help of a “Protestant Wind.” Promising to “defend the liberties of England and the Protestant religion,” William chased his father-in-law out of the country and established himself and his wife as King William III and Queen Mary II. Founded by “New Light Presbyterians” in 1746 as part of the “Great Awakening,” Princeton University’s particularly Protestant origin is thus reflected in the Orange color scheme, which recalls the Glorious Revolution’s successful overthrow of England and Scotland’s last Catholic king.
I don’t know what it’s like now now at Princeton in an increasingly secularized society, but, when I was a graduate student in 1970s, Princeton still had a real-life Scottish Presbyterian Dean for its University Chapel where an official chapel service along Presbyterian lines took place every Sunday. My Princeton Ph.D. commencement in 1977 featured the great hymns “God of Our Fathers” and “Faith of Our Fathers.” Such symbolic externals are important, of course, but even more important for my personal education was the presence on the faculty of Professor of Christian Ethics, Paul Ramsey, perhaps the foremost American Protestant ethical theorist of the 20th century (after the two Niebuhrs). I had the privilege of auditing Ramsey’s undergraduate lectures and enrolling in one of his doctoral seminars. It was quite a heady experience, enormously helpful for my interest in theological political theory, with long-term personal impact as well.
So as I put on my sometime academic attire today, I recall the incomparable role played by profound Christian faith and commitment in the founding of this great country and its great universities, and am left to wonder what our society would be like today if only we had remained faithful to our relgious heritage!
Posted by City Father