The Birth of Mary 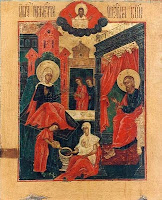 September 8 is universally celebrated in both Western and Eastern Churches as the Nativity of the Blessed Virgin Mary. The date is generally thought to be the anniversary of the dedication of Jerusalem’s Church of St. Anne (the name of Mary's mother according to ancient tradtion derived from the Protoevangelium of James). For many centuries, this feast was one of the four main Marian festivals in the Roman Calendar (along with February 2, March 25, and August 15). In the 7th century, Pope Sergius I ordered a procession to the Roman Basilica of St. Mary Major on each of those four feasts. For several decades, this feast was Profession Day in the Paulist Fathers. Since September 2003, the Nativity of Mary has also been observed as the patronal feast of the Diocese of Knoxville.

In a prayer he composed in honor of Our Lady’s birth, St. Anselm of Canterbury (1033-1109) prayed: Give me strength to praise you in prayer with all my powers, through the merits of your most sacred nativity, which for the entire Christian world was a birth of joy, the hope and solace of its life.

In the Ambrosian Rite (the liturgical rite proper to Milan), the Preface of today’s Mass proclaims: We celebrate this radiant birthday, when, like a wonderful bright star appearing, the Mother of God, Mary pure and glorious, was born into the world. She has opened to us the gate of eternal life which Eve in paradise had closed against us. Through Christ her Son she leads us back to the joyful light of our ancient home.
Posted by City Father