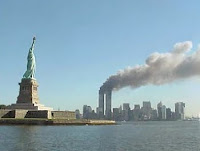 This coming Saturday marks the ninth anniversary of the tragic events of September 11, 2001. Nine years later, I still remember vividly how the sunny serenity of that beautiful late-summer morning was suddenly transformed into an experience of horror beyond anything most of us in my generation had ever even imagined, let alone experienced.

I can still quite clearly recall how, walking back to the St. Paul the Apostle parish office from John Jay College (where I had just cast my vote in that Tuesday morning's mayoral primary), I looked up at the bright blue sky and remarked that on such a beautiful day perhaps I might manage to spare some time later to spend in Central Park. How quickly everything changed! Already, by the time I had gotten back to my office, our country – and, in a particular way, New York City – had been suddenly and savagely attacked by an international terrorist movement motivated by a fanatical hatred for our country and our open way of life, The attack killed thousands of otherwise ordinary people and left the rest of us shocked, hurt, angry, and afraid, as we all saw the ugly face of war in a way we had not previously experienced it.

I remember in a special way those whose lives were lost – in particular parishioners of Saint Paul the Apostle Parish and Good Shepherd Parish, as well as our heroic neighbors from the local firehouse. I recall the outpouring of prayer that characterized the sad days that followed – Friday’s noon Mass attended by some 1000+ people in response to the President’s call, the Sunday morning Prayer Service I conducted at the Firehouse, the funeral at St. Paul’s of a United 93 crewmember who had sung in our parish choir, St. Patrick’s Cathedral draped in mourning for two months, and the many funerals and memorial services throughout the city, expressing our city and nation’s best values in the face of such terrifying evil.

Terrorism is not new, although the scale of that particular attack and the fact that it hit us at home were certainly new experiences for most Americans. If, once upon a time, we too easily took comfort in our country’s physical isolation from the rest of the world, we know better now. However ambivalent Americans have historically been about politics in general and international relations in particular, the age-old responsibilities of citizenship have, if anything, taken on a new urgency, as citizens in general and policy-makers in particular are challenged to make morally serious judgments in a threatening and insecure world.

Christian faith per se does not provide practical answers to particular political questions. The application of moral principles to social and political problems calls upon a particular type of human wisdom, traditionally associated with the cardinal moral virtue of prudence. As should be obvious, but sometimes seems to need repeating, when it comes to applying general moral principles to particular political or economic problems, perfectly sincere and reasonable people may well and legitimately come to competing and comparably compelling conclusions. That is why reasoned deliberation and respectful debate are so central to a healthy polity, and consequently why the increasing lack of such reasoned deliberation and respectful debate is so damaging to our current political life.

There are many factors that have contributed to this sorry situation. One of them is especially evident in the way the run up to this year’s 9/11 Anniversary has been dominated by the actions of a pastor of a 50-member congregation whose publicized plan to burn the Quran has gotten him more than his proverbial 15 minutes of fame, but who, in an earlier era, in a different media culture, probably would have gotten an amount of attention much more closely proportionate to the size and actual influence of his Church.
Posted by City Father