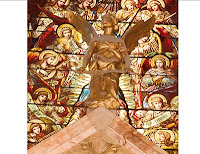 At the mature age of nine when I was confirmed – on September 22, 1957 – I chose “Michael” for my confirmation name. I did not choose that name to honor some relative or family friend. As best I can recall, what impressed me most about that name was its association with the great warrior archangel. Then war broke out in heaven; Michael and his angels battled against the dragon … who is called the Devil and Satan, who deceived the whole world, was thrown down to earth (Revelation 12:7-9). In those days, we regularly prayed this prayer to St. Michael the Archangel after (Low) Mass: St. Michael the Archangel, defend us in battle. Be our defense against the wickedness and snares of the Devil. May God rebuke him, we humbly pray, and do thou, O Prince of the heavenly hosts, by the power of God, thrust into hell Satan, and all the evil spirits, who prowl about the world seeking the ruin and destruction of souls. I really liked that prayer. And for my confirmation, I definitely wanted to identify with the great macho warrior archangel.

For centuries, St. Michael the Archangel was honored on this day (at one time a holyday of obligation). Hence, the traditional English name Michaelmas for this date. Coming just after the autumnal equinox, as the days are visibly darkening, it must have seemed a very appropriate day indeed to honor the Church’s champion against the original “Dark Lord.” Since the calendar reform of 1969, the archangels Gabriel and Raphael (the only other angels identified with proper names in the Bible) have lost their individual feast days and have been folded in with Michael in one composite feast of the Archangels Michael, Gabriel, and Raphael.

Where would we be without angels? I haven’t yet encountered any images of the archangels in my new church, but I have found a beautiful statue of an angel kneeling in prayer, which I hope soon to put to good use. Individual angels and choirs of angels often appear in church decoration. At St. Malachy’s (“The Actors’ Chapel”) on West 49th Street in New York City, where I served as deacon in the early 1990s and celebrated one of my first Masses in 1995, paintings of angels adorn the upper reaches of the church. Ten blocks north at the Paulist “Mother Church,” St. Paul the Apostle, angels form the subject of statues, murals, and windows in the sanctuary – among them the three gilded bronze angels kneeling above the baldachin over the High Altar and the four bronze angels with outstretched arms and interlocking hands that encircle the huge globe of the sanctuary lamp. The circular painting, The Angel of the Moon, high up on the south wall of the sanctuary is considered one of the most notable of John La Farge’s murals. It companion piece, The Angel of the Sun, on the north wall, was painted by William Laurel Harris (the same artist who also did the monumental mural The Crucifixion above the Church’s main entrance). Above and behind the High Altar, the central window depicts Mary Queen of Angels. On the south side of that central widow is a stained glass window of the Archangel Michael, and on the north side is one of the Archangel Raphael. The Archangel Gabriel appears in the painting above the Annunciation Altar in the south aisle. Painted figures of angels also flank that altar on either side, and angels are depicted adoring the Blessed Sacrament in the monstrance painted about the Sacred Heart Altar in the north aisle.

Likewise, the words of the liturgy daily remind us of the angels. Thus, we join the angels and the saints in proclaiming your glory in the Sanctus, an acclamation based on the prophet Isaiah’s vision of the angels in heaven (Isaiah 6:3-4). The Gloria’s opening words – Glory to God in the highest, and peace to his people on earth – recall the hymn sung by the angels to the shepherds on the first Christmas (Luke 2:14). At Funerals, we pray (preferably in the hauntingly beautiful traditional chant) May the angels lead you into Paradise. That familiar In Paradisum prayer was, of course, the basis for Horatio’s famous farewell to Hamlet, Good-night, sweet prince; And flights of angels sing thee to thy rest (Hamlet, Act V, Scene 2).

According to the Catechism of the Catholic Church, angels (whose existence is called “a truth of faith”) are spiritual creatures possessing intelligence and will, surpassing in perfection all visible creatures. As servants and messengers of God, they have been present since the creation, announcing salvation and serving the accomplishment of the divine plan.

Then, there are the Guardian Angels, commemorated separately on October 2.

It seems the angels really are everywhere – not just in pretty pictures and in the countless books found on the shelves devoted to angels in contemporary bookstores! Where would we be without them?
Posted by City Father