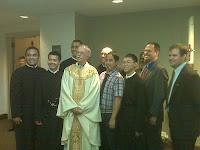 This evening, at the Paulist Seminary in Washington, DC, we celebrated the Final Promise as a Paulist for life of one Paulist student and the renewal of their Temporary Promises of six others. Tomorrow, our new, finally professed Paulist will be ordained a deacon at the Basilica of the National Shrine of the Immaculate Conception, thus beginning the final phase of his formation which will culminate on May 28, 2011, with his ordination to the priesthood at Saint Paul the Apostle Church in New York City.
It was an intimate ceremony in the small St. Paul's College Chapel, attended by, I would suppose, somewhat less than 100 people. The president of the Paulist Community was the Principal Celebrant, and some 14 Paulists and a few other priests concelebrated with him. Our three new novices were in attendance, and our newly professed student, who just completed his novitiate a month ago, assisted as acolyte. The President, Fr. Michael McGarry, preached movingly about the integrity which is fundamentally expected of us, whatever our specific vocation. After the actual professions, all the finally professed Paulists who were present renewed our own promise for life, recommitting ourselves to membership and mission in this community for the sake of God's kingdom.
As I stood among my Paulist brothers and repeated the words of that promise (which has been part of my daily prayer these past 24+ years), My memory went back to that wet snowy evening, January 25, 1986, when I was blessed to make my own solemn commitment for life. Mine was the last class to do so in the "old" (1956) chapel, now the seminary library. That night, there was no way I could have anticipated the twists and turns that lay ahead (and perhaps it was a blessing that I couldn't). Almost a quarter century later, I am still amazed by the awesome providence of God that led and guided me to that chapel that winter night and that has led and guided me (however confusingly and mysteriously at times) through many winters ever since.
May God in his goodness complete the blessed work he has begun in the students who have today committed themselves to an evangelical life according to the Constitution of the Society and to all who strive to follow Jesus and proclaim his kingdom in the word of today, attentive to the Holy Spirit and faithful to the example of St. Paul and the charism of Servant of God Fr. Hecker.
Posted by City Father