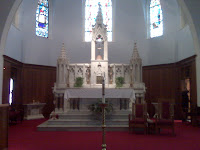 With the definitive approval of a new and improved translation of the Roman Missal, it may be hoped that the Church (especially the Church in the United States) may soon see some light at the end of the tunnel of internal polarization and factionalism that has sapped so much of the Church’s evangelizing energy since the 1960s. No, the new translation will not work miracles. Its implementation will not mark the end of the Church’s version of secular society’s culture wars. To borrow Winston Churchill’s famous phrase after the RAF had won the contest for control of the air known ever since as the “Battle of Britain,” it will not be the end or even the beginning of the end, but it may be “the end of the beginning.”

The “Liturgical Movement” of the 19th and 20th centuries was a serious scholarly enterprise, which illuminated the general shape of the Church’s liturgical life in the patristic period. Many of the 16th-century Reformation and Counter-Reformation debates about authentic liturgy had, in fact, been historical debates, conditioned on both sides by limited historical knowledge. The Liturgical Movement’s scholarship made it possible at last really to re-encounter the actual liturgical life of the early Church.

The Liturgical Movement, however, had an explicitly pastoral as well as scholarly agenda. In the wake of the French Revolution and the Industrial Revolution, it was hoped that a pastoral re-appropriation of the liturgical dynamism of the early Church might be the answer – or at least an answer – to the increasing de-Christianization of Europe. It was this pastoral agenda, animated by solid historical scholarship, that led to the papal liturgical reforms of the first two-thirds of the 20th century, culminating in Pope Pius XII’s radical (at that time) reforms – e.g., the reduction of the communion fast, permission for afternoon and evening Masses, the simplification of the rubrics, and the wholesale reform (pointedly called a “restoration”) of the Holy Week liturgy. The Liturgical Movement’s crowning fulfillment came in December 1963 with Vatican II’s Constitution on the Sacred Liturgy (Sacrosanctum Concilium).

Sacrosanctum Concilium established certain principles to be followed in the reform of the Latin liturgy and enacted certain specific measures for the Roman Rite. It did not (despite what some who may never have read it may think it did) directly mandate a vernacular liturgy or Mass “facing the people” (versus populum). The latter had, in any case, always been legal in the Roman Rite and was specifically provided for in the 1570 rubrics. Previously associated primarily with papal Masses, it had become much in favor among liturgists and became more or less the norm for the new liturgy, although again nothing even now prohibits the celebration of the new liturgy at an old altar (ad orientem). As for the vernacular, the Council clearly envisioned an increased role for the vernacular in the Latin liturgy. The snowballing of the post-conciliar reforms, rapidly leading to a virtually all-vernacular Mass by the end of 1967 and a new Missal and Lectionary in 1969, was a perfectly legal, legitimate extension of the reform by papal authority, but it certainly went well beyond the original liturgical mandates of Vatican II. (In the late 1970s I asked a certain Archbishop at a private party whether the Council Fathers would likely have voted for the liturgical reform had they known what was going to happen. He said he doubted it).

Much good has come from the liturgical reform. The new Lectionary’s selections may be too short and bereft of context in many cases and may excessively favor readings from the prophetic books, but they still represent a great improvement over the 1570 Lectionary in both the quantity and the variety of scripture that is read. One of Vatican II’s most distinctive liturgical reforms, concelebration, has helped priests to pray more communally; and the vastly increased participation of the people as a whole has amplified the communal dimension of our worship to the benefit of the entire Church community. And it may also be - as John Allen has intriguingly suggested (The Future Church: How 10 Trends Are Revolutionizing the Catholic Church, Doubleday, 2009) - that the vernacular liturgy may even have given the Church an edge in its contemporary competition with Islam (which requires its adherents to pray in Arabic).

It is also fair to say that much was lost in the reform, at least as it was actually implemented – most notably the Church’s heritage of liturgical music, much of which was gratuitously discarded often in favor of compositions of questionable merit, musically, theologically, and spiritually. Also the coincidence of the liturgical reform and the social breakdown of the 1960s contributed to an informal style that has ill suited and ill served the essential dynamic of liturgical ritual. The new and improved translation that is now on its way represents one effort to correct some of this.

Extreme opinions abound on all sides of debates about the liturgy in general, and about liturgical language and liturgical music and art in particular. Whatever the advantages of the old liturgy (and I am old enough to remember it well and appreciate its beauty and spiritual sensibility), the fact is that, reverently celebrated in an authentically liturgical spirit (which starts with the recognition that the liturgy is the worship of the Church and not the self-expression of any individual priest – or any particular group), the new liturgy is a faithful, authentic, and effective expression of the Church’s life and mission – as, of course, was the old liturgy.

The challenge facing the Church, which is highlighted in (but by no means confined to) the liturgical wars of recent decades, is the pervasive individualism of contemporary culture and its corrosive effect upon our public life, diminishing whatever is intrinsically intended to be oriented toward something other than the self. An individualistic rejection of traditional religious experience in favor of “spirituality,” and a general loss of traditional criteria of evaluation of experience in favor of criteria derived from entertainment are principal factors. To the extent that these negative dynamics derived from our contemporary secular culture are also increasingly operative in our religious practices, then the liturgy will inevitably be diminished in its ability to orient us to a life of authentic discipleship. Whether an unreformed Roman liturgy in Latin would have held its own better against the challenges of the 1960s and after is certainly an arguable proposition, but it is one which ultimately can neither be confirmed nor falsified. The question confronting the Church today is rather how to encounter the awesome mystery of the transcendent God’s presence and action among us – in spite of contemporary informality and the secular social and political agendas that increasingly dominate all our discourse. The attentive, reverent, and devout celebration of the liturgy, according to the mind of the Church and for the good of the living community of faith is one critical component in the Church’s ongoing challenge to continue Christ’s life and work in our world today. It is to be hoped that the new translation, besides being a more faithful rendition of the Latin text, will over time contribute to that end.
Posted by City Father