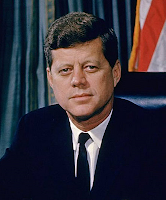 Sunday, September 12, will mark the 50th anniversary of JFK’s famous Houston speech. On September 12, 1960, the Democratic Party’s candidate for President of the United States, John F. Kennedy, a Roman Catholic, addressed the Greater Houston Ministerial Association on the so-called “religious issue” – i.e., whether or not a Catholic should be elected President of the United States. In the course of his speech, he spoke about the role his Catholic faith might be expected to have on his actions as President. The rest, as the saying goes, is history.

It was a very different America then, with a different kind of politics, when political conventions and party bosses still mattered more than primaries (in other words, more than money and the media) and General Election campaigns still began in earnest in September. It was a very different era, when Democrats were more bellicose than Republicans, and the great battle for the soul of the Democratic Party – the conflict over Civil Rights – remained as yet unresolved. The 1960 campaign highlighted the lingering Catholic-Protestant divide in American society. Kennedy became the first Roman Catholic to be elected President of the United States in part because he amassed 83% of the Catholic vote – in contrast to the 45% won by the Democratic candidate (Adlai Stevenson) four years previously – while still holding on to approximately the same percentage of the white Protestant vote the Democrats had garnered in 1956. In other words, Kennedy got Catholics to vote for him in overwhelming numbers, without scaring Protestant voters away.

No doubt, many Protestant voters came on their own to the common sense conclusion that (whatever its theoretical claims and whatever may have happened in other places at other times) the Catholic Church in 1960 posed no credible threat to the US Constitution and the American way of life. If help were needed to come to that conclusion, however, clearly Kennedy’s Houston speech was a major, if not decisive, contributor. And, rightly so, for it was a masterful rhetorical expression of the case for religious tolerance, expressed in language which resonated with the experience of Americans of any and every faith.

It was JFK’s successful strategy - not just that night but throughout the campaign - to turn the anti-Catholic argument on its head and paint his opponents on this issue as the ones who were being un-American. He did it well, and he was right – as well as successful – in doing so.

But, in his effort to emphasize his – and American Catholics’ – commitment to our constitutional liberties, some of what Kennedy said proved much more problematic and has raised serious questions ever since. “I believe,” Kenendy asserted, “in an America where the separation of church and state is absolute …”

Found nowhere in the constitution, that infamous phrase “separation of Church and state” is from an 1802 letter of Thomas Jefferson, quoted by Hugo Black in a 1947 Supreme Court decision Everson v. Board of Education. Just one year later, in their 1948 pastoral letter, The Christian in Action, the US Bishops explicitly labeled “separation of church and state” as a “shibboleth of doctrinaire secularism.”

In effect, Kennedy’s formulation of the problem may have helped produce the present predicament in which one’s religious beliefs are increasingly seen as one’s purely private quirks which ought to have no impact on one’s views on maters of public policy, a view completely at variance with the entire previous trajectory of American history. As historian Mark Massa later expressed it, Kennedy secularized “the American presidency in order to win it” (“A Catholic for President? John F. Kennedy and the ‘Secular’ Theology of the Houston Speech, 1960,” Journal of Church and State, Spring 1997).

Clearly Kennedy did go quite far in appropriating the emerging language of radical secularism to make his case that a Catholic could be a good citizen – and so also a good president.
I think the fundamental problem with the legacy left to our religious and political discourse by Kennedy’s Houston speech, however, is that there has been a fundamental change in American society since 1960 that has rendered Kennedy’s simplistic formulation of a solution to the problematic of the relation of religion and society no longer viable. What worked pragmatically in what was still then an overwhelmingly religious country, characterized to be sure by a great deal of denominational diversity but united by a high degree of moral consensus, may simply no longer suffice in a society now so much more polarized on religious and moral matters.

Consequently, one of the things Kennedy warned against in his Houston speech - “the whole fabric of our harmonious society” being “ripped apart at a time of great national peril” - ironically may now be progressively coming to pass through the (by American standards) unprecedentedly aggressive radically agenda of secularizing elites, increasingly evident in such critical institutions as the academy, the media, and the judiciary.
Posted by City Father