Breakfast at The Flame 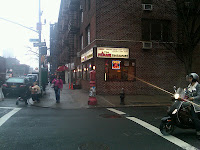 For as long as I have been a Paullist, The Flame Diner at the corner of 58th Street and 9th Avenue has been a stalwart hangout for parishioners of the Paulists’ mid-Manhattan Mother Church. Moreover, for much of my 10-year stint as associate pastor at St. Paul the Apostle, generally Wednesday morning meant Breakfast at The Flame. The origins of the practice pre-dated my arrival, and many of the original regulars have long since ceased to be a part of it, but a faithful remnant still breakfasts together more or less consistently around 8:00 a.m. on Wednesday mornings. No longer a regular myself, of course, having moved to Tennessee in 2010, I still consider myself a “Wednesday Breakfast Alumnus” and so make it my business to try be there at The Flame whenever I happen to be back in New York on a Wednesday morning. That is why I was there today – still a little jet-lagged from yesterday’s 13-hour door-to-door trip from Rome, but ready (after two months abroad) for a good New York omelet!

“We all have to eat,” Eleanor Roosevelt supposedly said to Edward R. Murrow’s wife, when the latter called the White House on December 7, 1941 - on the reasonable assumption that the Murrows’ invitation to dinner with the Roosevelts that evening would be cancelled. The Roosevelts notoriously cared little about their food. Others of us care a lot more. Some look down on diner food. But New Yorkers know that you still can’t beat a good NYC diner for really good food at something like a reasonable price.

Diner food is typically good food. It’s also (typically) plentiful, and diner menus are widely known for the abundance and the variety of the choices they offer. Often, they highlight the city’s ethnic character. Greek Diners and Kosher Diners seem particularly popular.

Diners also offer two things that in this age of gentrified, class-based eating we run the risk of losing – a welcoming place an individual can unselfconsciously sit and eat alone as well as a casual environment where friends, co-workers, etc., can grab a quick (or not so quick) inexpensive meal combined with quality time together. (Not that long ago, American cities typically had lots of such places).

The Flame is all those things – and a precious part of richly diverse and vibrant neighborhood, to whose social cohesiveness it contributes.

And the omelets are good too!