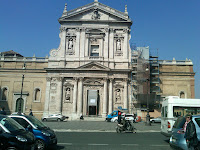 For over 1000 years, before the 1969 Reform jumbled the Lenten liturgy, the texts of the Masses for the Lenten weekdays - what Pope St. Pius X famously called those "most ancient Masses of the season" - were often chosen with primary reference to that day's stational church. This was certainly the case in the old liturgy for the Saturday of the 3rd week of Lent, when the station was at Santa Susanna, a Roman "titular" church, and one of the original 25 parishes of Rome.
Thus, the Old Testament lesson was taken from Daniel 13 - the story of the virtuous matron Susanna falsely accused of adultery but saved from execution by the last-minute intervention of the prophet Daniel. Daniel's Susanna was part of the Jewish exile community in Babylon - obviously not the early Christian virgin martyred by Diocletian in a grisly foreshadowing of the Great Persecution he would shortly unleash. The use of the Old Testament story about Susanna's namesake was, however, a classic example of liturgical "accommodation" - a practice reflected artistically in the beautiful Renaissance frescoes which adorn the walls of the church and which link the story of the Old Testament Susanna with that of the martyr Susanna.
In the old liturgy, the daily Old Testament lesson and the Gospel reading were typically matched. Thus, the gospel for this day used to be the account in John 8 about the woman caught in adultery. In other words, the liturgy started with the story of a just God's intervention to save an innocent person from a corrupt process and then compared that with God's even greater intervention on our behalf in Jesus, whose great mercy can save even the guilty.
Likewise the frescoes in the church walls tell the story of the two Susannas - the first saved from human injustice, the second triumphing over human injustice through the great grace of martyrdom. Indeed, in the life of the Church, nothing can quite compare with the sublime grace of martyrdom - something of which one is daily reminded her ein Rome (especially at the station churches).
Justice is a good thing. It makes human societies work well - or at least a lot better than they would work without it. If we can at least treat one another justly, we have accomplished something of value in human terms. But, as Portia reminds us in The Merchant of Venice, "in the course of justice none of us should see salvation." As the former pairing (for 1000+ years) of Susanna and the woman caught in adultery was meant to remind us, for what matters most we need and depend on the great mercy of God, which totally transcends the constraints of justice. As the parable of the debtors reminds us so well, just as we depend totally on the God's mercy for ourselves so we need to be true exemplars of mercy in regard to others. Our own experience of forgiveness should fill us, so to speak, and so overflow in an abundance of forgiveness of others.
Posted by City Father