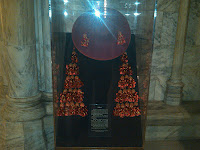 No trip to my hometown would be complete without a visit to America’s premier cathedral - complete with a glorious galero now on display there (photo). So Thursday afternoon, after spending some time with my sister and attending my niece’s High School Band Concert at the Madison Avenue Atrium, I cut through Trump Tower and quickly walked the few blocks down 5th Avenue to St. Patrick’s Cathedral, since 1879 the spiritual heart of the city, where I said a quick prayer at the Altar of Exposition and then lit a candle to St. Joseph. Less than a week ago, on St. Patrick’s Day, New York’s Archbishop Timothy Cardinal Dolan announced that the great 19th-century neo-gothic cathedral (a National historic Landmark since 1976) will undergo a $175 million restoration over the next three to five years. That same day, at the traditional pre-parade St. Patrick’s Day Mass, the other new American cardinal, NY-born and bred Edwin Cardinal O’Brien (ordained in that same cathedral by Francis Cardinal Spellman) preached a moving feast-day homily highlighting the forthcoming restoration - see “Patrick, Make Us Worthy of This Cathedral” http://whispersintheloggia.blogspot.com/2012/03/patrick-make-us-worthy-of-this.html

I have so many memories of St. Patrick’s – from childhood visits with my family, to more personal ones later in times of loneliness and stress, the countless Chrism Masses and other diocesan celebrations I attended there as a deacon or a priest, the sad months of mourning there after 9/11, and the jubilant visit of Pope Benedict XVI in 2008. In a nation where many cathedrals hardly look the part, St. Patrick’s elevates its environment and invites all who enter it into the mysterious communion that transcends time as well as space. May it long stand as a glorious symbol of Christ’s continued presence in his Church - and, through the Church, in every human city!