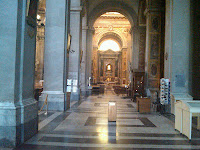 Perhaps even more undignified than the pointless indignity of having to study for an exam at my advanced age is actually having to take one. Well, that's what I did this afternoon - certainly my first exam in over 25 years! I spent almost the entire day in a state of obsessive anxiety as I anticipated the ordeal and waited impatiently for it to be time to go for one last time to the now familiar setting of the Urbaniana. After the seemingly endless ritual of taking attendance, the envelope with the questions was selected, and the 5 questions were read out. That took more time, of course, since they had to be repeated several times for everyone to write them down! Then I scribbled for just over an hour. Scribbled is unfortunately the right word. even as a child, when penmanship was still valued and taught and graded, my handwriting was atrocious. I had an "immature handwriting" I was told then. I fear that 50+ years later I haven't matured all that much! (If anything, the fact that I actually write very little, other than my signature, in script anymore has probably made my penmanship even worse). Of course, I can read my writing. Studying for my exam, I found my class notes quite legible - if a bit humorous as I read some sentences scribbled in Italian, others translated impromptu into English, others half-and-half or in English but in Italian word order!
We were advised to expect the results around the middle of May. That should certainly give the readers sufficient time to decipher my writing!
Anyway, what matters now is that I am finished! After handing in my exam, I left the Pontifical University of the Congregation for the Evangelization of Peoples for the last time, walked down that pesky hill for the last time, and crossed the Prince Amedeo d'Aosta Bridge for the last time. Before boarding the bus on Via Acciaioli, I stopped in the beautiful church of San Giovanni Battista dei Fiorentini (photo) for a short prayer of thanksgiving. On the bus, I talked to some Scottish Rugby fans in town for the big match tomorrow. they got off at Piazza Barberini. I got off one stop later. It could have been any ordinary commute home. But it was the last one!
Posted by City Father