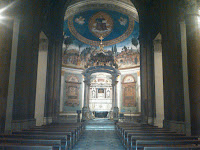 This past Thursday marked the arithmetic mid-point of Lent. There is, in fact, a theory among some scholars that the original Roman Lent was only half as long as it later became, and that it actually began on what is now the 4th Sunday of Lent (or possibly on the previous Friday). In any case it is certainly noteworthy that, in the traditional Lenten liturgy until 1969, one could sort of distinguish two parts to the season with definitely distinctive emphases. In the first half of Lent, the focus was primarily on fasting and penance. Beginning, however, on the Friday of the 3rd week (when the Gospel of the Samaritan Woman used to be read), the focus became more baptismal, while the Gospel readings were taken predominantly from John and generally highlighted the growing conflict between Jesus and the world around him.

Whatever one makes of that all that, this Sunday is now considered the liturgical mid-point of Lent and has long been observed accordingly. Hence, the lightening of the somber Lenten purple with rose-colored vestments, and (in the traditional liturgy) the permitting of flowers on the altar and a greater use of music. Here in Rome, the traditional station church for today (photo) is the Basilica of Santa Croce in Gerusalemne (The Holy Cross in Jerusalem), built to enshrine the relics returned to Rome by St. Helena. The choice of station reflects (or perhaps caused) the traditional opening words for today’s Mass, Laetare, Jerusalem (“Rejoice, Jerusalem”).

Outside of the Roman stations, the link with Jerusalem is now largely forgotten – although it sort of survives (perhaps inadvertently) in this year’s “B” cycle, thanks to the Old Testament reading (2 Chronicles 36:14-16, 19-23) reprising the Babylonian destruction of Jerusalem’s First temple, the Exile, and then Cyrus the Persian’s permission for the Jews to return to Jerusalem and rebuild the Temple. Chances are that connection is generally little noted and seldom remarked upon, however. If anything, it is likely the Laetare part that tends to get recalled – especially in churches where rose vestments are retained. Concelebrating at Santa Susanna in Rome, I myself had to settle for a regular purple chasuble, but the principal celebrant was fittingly all vested in rose (a much more beautiful rose chasuble, I must admit, than the one we have in my parish back home).

There are many popular customs connected with Mid-Lent among them the original English Mother's Day ("Mothering Sunday"). One particularly nice Roman Laetare custom (which perhaps deserves more attention than it normally gets) is the blessing by the Pope of the Golden Rose which will subsequently be bestowed as a papal honor. The Rose used to be given to the Holy Roman emperors at their coronation and over the centuries has been given to kings, queens, princes, princesses, governments, cities, churches, and shrines. Henry VIII of England received it three times – perhaps not the best example! Beginning in the late 18th century and continuing to the mid-20th century, it was given exclusively to women, primarily Catholic queens - among them (see http://www.youtube.com/watch?v=lfb3jOsHC_c&feature=related) in 1937 Queen Elena of Italy (who, since 2001, is now a Servant of God).

The last individual to receive it was the Grand Duchess Charlotte of Luxembourg in 1956. In more recent years, it has been given exclusively to religious shrines. In 2008, Pope Benedict XVI bestowed it on the Basilica of the National Shrine of the Immaculate Conception in Washington, D.C.

Undoubtedly, Mid-Lent meant a lot more when Lent was widely observed as a season of serious fasting. In a world where Lent is barely noticed, its midpoint loses much of its historic significance. Perhaps, the fact that for centuries the middle of Lent was perceived as such a noteworthy occasion ought to serve as a challenge to all of us to make more of the opportunities presented by this special season.