At the Abbey of Tre Fontane 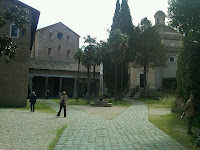 This morning, I visited Tre Fontane, the traditional site of St. Paul’s martyrdom. Because of its distance from the center of Rome and the time it takes to get there and back, I had never gotten to Tre Fontane on any previous visit to Rome, and so I was determined to do so during this lengthy stay (now coming quickly to its close). After taking the Metro, Linea B, all the way to the last stop, Via Laurentina, I wandered around for a while trying to find the right bus stop, which I found eventually - in the place where I should have looked first! Then I waited some 20 minutes or so for the 761 Bus. It’s a short distance, and I probably could have walked it (I did in fact walk back to the station after my visit), but it’s mostly uphill from the station to the Abbey, and I didn’t know how much walking I would have to do at the Abbey itself (not too much, as it turned out). So I waited. Once on the bus, I positioned myself where I could read the bus stop signs; but, by the time I had realized I was at the Tre Fontane stop, it was too late to get off, and I had to ride a considerable distance to the next stop, after which I waited another 15 minutes or so for a bus back to where I needed to get off!

Murphy’s Law seemed to be fully operational this morning!

But, once inside the Abbey grounds, the hassle and frustration of getting there were all worth it! One enters through a wooded path, welcomed by a huge statue of St. Benedict. I assume that the wall to my left separated the public path from the monastic enclosure. I saw no actual signs of the monks’ presence. So the enclosure seems effective! (Tre Fontane has been a monastic sight for much of its history; but, after having been abandoned for some time, it was given by Blessed Pope Pius IX to the care of the Trappists, who successfully de-malarialized the area and planted numerous eucalyptus trees. After 1870, they were able to stay on the site by first renting and eventually buying the property from the Italian government. It is here also that the lambs are raised, from whose wool each new metropolitan archbishop’s pallium is made).

There are three churches on the site. To the left at the end of the first path is the actual monastic church dedicated to SS. Vincent and Anastasius. The sanctuary area is fenced off, but it has a nave and two aisles and offers an inviting atmosphere for quiet personal prayer. To the right is a second church, Santa Maria Scala Coeli, so named from the legend that, while celebrating Mass there, St. Bernard saw the soul he was offering the Mass for ascend by a ladder from purgatory to heaven. Below is a crypt, called the “Prison of St. Paul,” which contains the relics of St. Zeno and his fellow Roman legionaries martyred by Diocletian in 299.

Between the two churches is another charming path, with some exposed ancient pavement, leading to the Church of San Paolo alle Tre Fontane, which commemorates the presumed site of St. Paul’s martyrdom. According to legend, when St. Paul was beheaded, his head bounced three times, causing three fountains (hence the name Tre Fontane) to spring up. Whatever their origin, the three fountains are very much there, very much the focus of attention, in the sanctuary. (Even bending down, I could not actually see the water, but the sound of the flowing spring was certainly vivid enough to impress!)

After taking my obligatory photo of the fountains, I spent some time kneeling in prayer in that special place. My mind recalled the beautiful, early 20th-century painting of St. Paul about to be beheaded above St. Paul’s altar in the Paulist “Mother Church” in New York, with its quotes from Paul’s famous words to Timothy, I have fought the good fight, I have kept the faith. I prayed that, when my final day comes (hopefully not by beheading), I too may make those words my own.