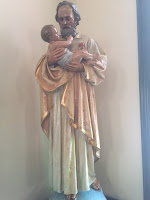 In today’s Gospel [Matthew 13:54-58], Jesus returns to his hometown, where the townspeople, to whom Jesus and his family have long been very familiar - and very ordinary - take offense at him. He was (or so they thought) an ordinary guy, someone like them, a working-class schlepp (as one might say back in New York).

We hear this gospel story today in the context of our current crisis, which has highlighted society’s extreme dependence for our survival on all sorts of ordinary workers, like those who work in grocery stores, for example, workers we ordinarily treat as unimportant compared with rich and powerful people whose work benefits largely only themselves and people like them.

Two and a half centuries ago, Adam Smith, spoke disapprovingly about what he called “This disposition to admire, and almost to worship, the rich and the powerful, and to despise, or, at least, to neglect persons of poor and mean condition,” which he called “the great and most universal cause of the corruption of our moral sentiments.”

How ironic that it is precisely such ordinary, unappreciated “persons of poor and mean condition,” whose social and economic well-being our society has largely neglected for decades, are now seen as “essential workers” - poorer people in low-paying jobs that our wealth-worshipping society habitually disrespects and whom this present pandemic so directly endangers.


When Pope Pius XII invented today’s feast of Saint Joseph the Worker in 1955, he did so in response to the 20th-century labor movement. The social and economic progress made by workers in the 20th-century is now largely a thing of the past.  As our current crisis demonstrates, for many (who in an earlier era would have been beneficiaries of the labor movement) things have been getting consistently worse on multiple levels.  It’s nice to step out on one’s balcony and applaud essential workers, as many do these days in certain cities. But maybe the moral of this feast is that a lot more is called for, lest we too, like the people in Nazareth, dramatically miss the point of what God is showing us by becoming not just one of us, but an ordinary, unappreciated worker one of us!

Homily for the feast of Saint Joseph the Worker, Immaculate Conception Church, Knoxville, TN, May 1, 2020.


The entire Mass may be viewed on the Immaculate Conception Church Facebook Page and later on the parish website icknoxville.org.
Posted by City Father