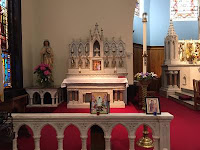 On the night before he died, Jesus tried to console his disciples with the now familiar image of his Father’s house’s many dwelling places. Apparently, his disciples felt the need for even more reassurance “Master,” the Apostle Philip said to Jesus in the Gospel we just heard [John 14:1-12], “show us the Father, and that will be enough for us.” Now, most of us were brought up to be properly respectful to our teachers. So we instinctively peg Philip as a bit bold. Jesus’ response would seem to confirm our instinctive sense that what Philip was asking was really rather over-the-top. “Have I been with you for so long,” Jesus said to Philip, “and you still do not know me?”

So how did Jesus answer? “Whoever has seen me,” he said to Philip, has seen the Father.” Jesus is saying the he himself is our direct line to God, and that we experience God’s presence and activity in our lives most fully and effectively in our experience of Jesus.

There is an added irony in this Gospel story. A few days earlier, some Greeks had asked to see Jesus, and Philip had served as their liaison, their conduit, to Jesus [John 12:21-22]. Already, without knowing it, Philip was evangelizing. Often, in fact, we may be bringing others closer to God without fully knowing that we’re doing it!

Now the normal way we meet Jesus – and also the normal way we share him with others – is in the Church, where we do so not as isolated individuals, but as “a chosen race, a royal priesthood, a holy nation, a people of his own,” as Saint Peter proclaimed in today’s 2nd reading [1 Peter 2:4-9], quoting God’s words at Mount Sinai to the people of Israel [Exodus 19:5-6]. What God told Israel and (according to Peter) applies now to the Church is to be the liaison, the conduit, between God and the world, which we are because, like Philip, we too experience Jesus, the Risen Christ, living among us, always present in his Church.

If nothing else, this episode and others like it remind us yet again of the perennial problem of factional conflict, of cultural and ethnic divisiveness, and of ideological division and polarization, that characterize our world and can so easily undermine the unity and universality even of the Church and thus get in the way of its mission – not just in 1st-century Jerusalem but in every time and place. Then as now, aspects of life within the Church community can sometimes seem simply to replicate the conflicts and divisions that themselves seem to define our secular society – so much so that it is said that Americans increasingly choose their church affiliation or their local parish on the basis of their politics!

But there was more to the story of the apostolic Church than out-of-control factional conflict. After all, the Jerusalem Church didn’t split into separate sects. Instead of a threat to their unity, this episode shows us how - trusting in the Risen Christ’s continued, living presence as Lord in his Church - the apostles responded to the challenge they faced with creative confidence. They saw how the challenge they were faced with could become an opportunity instead of a threat.

Today, faced with a terrifying global pandemic and divisive conflicts, even within the Church itself, about how to respond to this challenge, we are being called upon to show once more that “true permanent and burning enthusiasm frought with the greatest of deeds,” which is what it will take for us to continue to be that powerful link that Christ intended his Church to be to all types of people – a Church as alert as were the apostles to the challenges and equally as ready to respond to the opportunities.

Homily for the 5th Sunday of Easter, Immaculate Conception Church, Knoxville, TN, May 10, 2020.