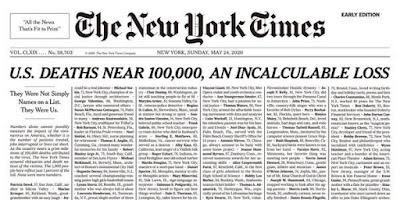 Sunday's NY Times devoted its front page ("U.S. Deaths Near 100,00, an Incalculable Loss") to listing the names of many pandemic-connected fatalities.

Memorial Day disposes us (or at least used to dispose us before we turned it into just another long weekend summer holiday) to think about those who have gone before us - an occasion to recall those who have die and continue to die in our ongoing apparently interminable wars, and an appropriate occasion (so it might seem) to remember the almost 100,000 Americans (and the thousands of others around the world) whose lives have been cruelly cut short by this pandemic, an opportunity to mourn them collectively as a society, something individuals have been unable to do in anything like a normal way because of the necessary restrictions under which we have been living.

Collective rituals of national mourning are rightly restricted to losses to our common life - the deaths of statesmen, tragic accidents (like the deaths of the challenger astronauts), and casualties of war and terrorism . Our mounting national death toll from COVID-19 comes closest to resembling a long-term terrorist attack - not just the sum of so many individual tragic losses but a wound penetrating deeply into the nation's heart.

In normal times of course, our national leaders would lead us in national mourning. Such mourning, however, as Jessica Goldstein has written in The New Republic, "requires one to pause and remember; this administration is hell-bent on hurtling forward as if what is currently happening never really happened at all." Indeed, the pandemic has only illustrated how our national leaders are themselves a major part of our national illness. "The president's boundless cruelty and ignorance," Goldstein reminds us, have been "enabled by his administration's incompetence ... and avarice ... aided and abetted by staggering civic indifference from elected officials who ran for office on 'pro-life' platforms only to turn around and demand the rest of us be willing to sacrifice our parents and grandparents on the altar of the Dow."

All the more reason then "to pause and remember," which is what this day is supposed to be for.
Posted by City Father