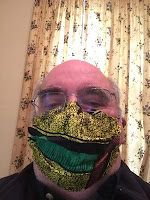 Being neither a scientist nor a medical professional, I really have no idea how effective masks are in combatting Covid-19. I heard on TV the other day the theory that if 60% of Americans wore masks for 2 weeks that could kill off much of the virus. If so, that should certainly be more than enough motivation to do the right thing. And even if that theory were to prove false, there would still be plenty of good grounds to encourage - and even mandate - face coverings in public. So why is it that this practice - admittedly a new and inconvenient change in our customary behavior - has become so apparently controversial, at least among certain segments of the population?

The fact is that, while the actual degree of scientific certainty behind this practice may be open to legitimate debate, in fact rational debate about the alleged medical benefits of covering one's face in public is not what this controversy is really all about. Rather it has become yet another expression of the tribal division of American society - sometimes dignified with the more academic-sounding term "political polarization."

Whatever one calls it, American society is increasingly divided into two tribe-like groups, whose main basis for group identity and group solidarity seems to be their hatred for those in the other group. Scientific facts and their medical applications, which one might think would be paramount to decision-making in the face of a global pandemic, seem to have a lot less to do with how one views the advice or requirement to wear a mask than which "tribe" one has chosen to identify with. This is tragic, of course, because the virus (like climate change) does not discriminate on the basis of tribal divisions.

Way back when, most people had multiple overlapping identities ("cross-cutting cleavages" in academic speak). So one could be a factory worker, a union member, a hunter and gun owner, a Catholic, a citizen of California, a male, married, etc. One's political party, probably an inherited identity, would have been one more (but not necessarily any more decisive) group with which one identified. Increasingly, however, political party has become the predominant identity, within which all else is largely subsumed (including in many cases religious affiliation). This is all part of what has been called "the big sort." Given this decades-long development and given the Republican Tribe's intense animus against scientific expertise, it should come as no surprise that the scientific and medical merits of masks in the current COVID-19 crisis have become secondary considerations compared with the primary consideration of which Tribe one identifies with - and how wearing or not wearing a mask has become symbolic of one's tribal identification.

By ostentatiously refusing to wear one himself, the President has reinforced the mask's symbolic character - continuing the division of our society to its long-term detriment. And so it is that recent research reveals that "Democrats are more than 20 percentage points more likely than Republicans to (75% versus 53%) report wearing masks in public," and that "Mask-wearing levels are consistently lower across the board in states that voted strongly for Trump." (The researchers were political scientists Shana Gadarian, Sara Goodman, and Tom Pepinsky.)

First Things' editor R.R. Reno's recent (and now infamous) extreme tweets and other fulminations on the subject simply illustrate this absurd situation in which those on that side of the partisan divide have abandoned all other perspectives and can see things only through one narrow culture-war tunnel. As Vox's Zach Beauchamp has observed, the question for Reno "is not 'does wearing a mask contribute to public health,' but rather 'what does wearing a mask say about where I stand in the culture war.' He sees the issue not through the lens of substance but of symbolism."

It is, of course, the insistence of reducing all of life to that narrow culture-war tunnel (with no proverbial light at the end of it) that has brought our politics to this state.