Praying for the Tsar 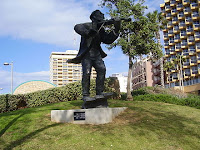 In Fiddler on the Roof, there is a scene where the Rabbi is asked if there is a proper blessing for the Tsar. To this, the Rabbi responds, "May God bless and keep the Tsar ... far away from us!"

I often think of that perfectly nuanced prayer whenever religious leaders cite Saint Paul's instruction to pray for civil authorities. Saint Paul was quite right to do so, of course; but, here as elsewhere, context counts.

First of all, then, I urge that supplications, prayers, intercessions, and thanksgivings be made for all men, for kings and all who are in high positions, that we may lead a quiet and peaceable life, godly and respectful in every way. This is good, and it is acceptable in the sight of God our Savior, who desires all men to be saved and to come to the knowledge of the truth (1 Timothy 2:1-4).

In other words, we are commanded to pray for those in authority, precisely in their public capacity, so that they may be able to fulfill their mission, which is our earthly society's peace and well being - that they might in the words of the US Constitution promote the general welfare.

Of course, as Christians we pray also for their personal health and well-being. We wish no less for anyone, whether in public or private life. The particular prayers we are commanded to offer for our public officials, however, are for them in their public capacity, as those whose mandate it is to promote the general welfare.