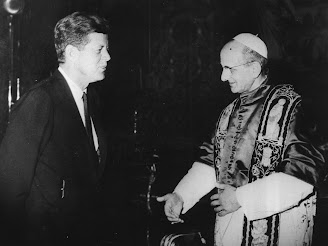 For only the fourth time in American history, A Roman Catholic is the nominee for president of one of our two major political parties. (In all four cases, it has been the Democratic party that has tried to break this barrier, just as it has been only the Democratic party that has ever nominated an African-American or a woman for president. On the other hand, the Republicans have twice broken the taboo against divorced and remarried men becoming president.)

Of the four, only one, John F. Kennedy, actually won the presidency. Even so, the sky didn't fall in. So one would expect the issue of religion to have significantly lost its salience. On the day after the election in 1960, I remember the editorial in The New York Daily News (which had endorsed Nixon) saying that the election had dropped a "hydrogen bomb" on the tradition that a Catholic could not be president, and that that was a good thing.

Yet here we are, 80 years later, and the Catholic candidate's opponent has said of him that "He's against God." As if that were not weird enough as a rephrasing of traditional American anti-Catholic Protestant polemics, President Trump also used the strange expressions "Hurt The Bible, Hurt God." It is not at all clear in what theological understanding of the divine nature that it is possible to hurt God. Nor is it at all clear what, apart from damaging the physical book, it could possible mean to hurt the Bible. But, of course, Trump is not someone well known for his lifelong devotion to understanding the meaning of religion - unlike Biden who has historically shown an interest in religion and has always claimed to have been deeply motivated by his. (In this respect he is quite different from Kennedy, who tried to be very circumspect about keeping his religion out of public discussion as much as possible.)

Trump's attack on Biden's religion reflects a kind of comic recapitulation of the bigoted Protestant arguments against Kennedy in 1960. It reminds one of Karl Marx's famous observation in The Eighteenth Brumaire of Louis Napoleon, that history repeats itself "the first time as tragedy, the second as farce."

The day when one's religion - either the religion of the candidate or the religion of the voter -had a decisive impact on elections may well be long past, although, of course, in a close election any factor may matter. Who knows what impact Biden's religion - or Trump's disparagement of it - may have on those supposedly "swing voters" in key states who may decide the election? We'll know in November.