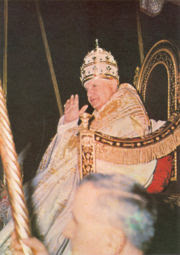 This month we have witnessed the new pandemic version of a venerable American institution, the presidential nominating convention. Like some of you, I am actually old enough to remember the good old days of contested conventions which actually picked their party’s candidates. That is no longer the case, of course, and hasn’t been for a while. But, whatever form the conventions take, their arrival is another sign that this election season is entering its decisive phase. And it reminds us that every society, secular or religious, requires leadership; and the way a society’s leaders, secular or religious, are chosen will always say a lot about the society itself.

Today’s Gospel recalls Jesus’ choice of Simon Peter to lead the Church that the Risen Christ would leave behind. Nowadays, you can find all sorts of wonderful things to watch on YouTube, like old newsreels of political conventions and campaigns.  And, if so inclined, you can also find some 25 Italian videos of the coronation of Peter’s successor Pope John XXIII in 1958. Several times during that lengthy ceremony, the Sistine Choir chants Jesus’ words which we just heard in today’s Gospel: Tu es Petrus, et super hanc petram aedificabo ecclesiam meam (“You are Peter, and upon this rock I will build my church”).  In videos 13 and 14, you can watch and hear that same Gospel account chanted - twice in fact – first in Latin and then in Greek. I guess that’s what called making a point!

Today’s familiar Gospel takes us back in time - from the baroque splendor of St. Peter’s Basilica and the institution that is the modern papacy to the region of Caesarea Philippi and to that first Pope, Peter himself. What the Romans at that time called Caesarea Philippi was about 20 miles north of the Sea of Galilee in territory then ruled by King Herod’s son Philip. Now known as "Banias," it was then the site of pagan temple to the god Pan. Israel’s border was not then the war zone that it is now, and its borders were not patrolled and fortified the way they are now, but it was still a border with its own symbolic spiritual significance.

It was to that somewhat foreign, pagan place that Jesus took his disciples, and it was in that somewhat foreign, pagan place that he challenged them to answer what would become the basic Christian question: Who do you say that Jesus is? As their future leader, Peter answered on behalf of the disciples – on behalf of the entire Church: You are the Christ [the Messiah, the Anointed One], the Son of the living God. Not only does Peter proclaim that Jesus is Israel’s hoped-for Messiah, but – in that site sacred to the son of Zeus – he proclaims Jesus as the Son of the living (that is, the one and only true) God.

Then as now, Peter speaks for the Church – not just for his fellow apostles, but for all of us. In response, Jesus assures us that Peter’s profession of faith is not some merely human opinion, one option among many in the global religious marketplace, but a revelation from God – one which Peter himself, at that stage, still only poorly understood. From such a modest beginning in such an oddly out-of-the-way place, Peter’s profession of who Jesus is, has been the center of the Church’s proclamation – as Peter’s role has since likewise remained central to the Church’s identity and mission.

Fast forward to the baroque basilica built above Peter’s tomb, where the current occupant of Peter’s office continues to speak - on behalf of the Church for the sake of the whole world. As Peter’s Successor, the Pope serves as the Church’s visible source of the unity across space and time. Across space (as we say in the Eucharistic Prayer), one Church has been brought together “from every people, tongue, and nation,” so that “in a world torn by strife,” God’s people “may shine forth,” as a universal Church, “a prophetic sign of unity and concord.” That unity across space is illustrated not only when pilgrims from all over the world assemble in Saint Peter’s Square for the papal blessing urbi et orbi, “to the city and the world,” but also more recently when modern, pre-pandemic popes have visited local churches around the world. Even more recently, that visible unity across space was reflected in the image of the Pope alone leading prayer in Saint Peter’s Square, while the rest of us, hiding in our homes, watch from a safe distance via TV or internet.

Since then, the Pope has led the Church in praying that Christians would respond to the reduced restrictions with “prudence and obedience.”

This unity across space is uniquely possible because of the Church’s unity across time - our unity with Peter in his profession of faith in the Christ, the Son of the living God, whose own victory over death has definitively guaranteed that the gates of the netherworld shall not prevail against the Church. Our unity across time in professing the ancient apostolic faith of Peter, makes possible our present unity across space as Christ’s Church in divided and threatened world, which in turn fosters – for both the Church and the world - our future hope for both space and time in the kingdom of heaven.

It is well known that, especially in certain segments of the American Catholic Church in what for lack of a better term we might call the political and religious right, criticism of the Pope (particularly of the current Pope) has become quite common – and in a way that goes well beyond ordinary questions or disagreements about particular policies, the sorts of ordinary questions or disagreements that always occur in any living institution. Recently the retired patriarch of Venice and Archbishop of Milan, Angelo Cardinal Scola, spoke out about this contemporary problem, which is increasingly so typical of our particularly polarized politics.

“It is not by affinity of temperament, of culture, of sensibility, or for friendship, or because one shares or does not share his affirmations that one acknowledges the meaning of the pope in the church,” Cardinal Scola has reminded us. It is rather that the Pope “is the ultimate, radical, and formal guarantee … of the unity of the Church.”