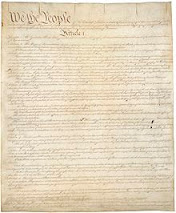 Just yesterday, commenting on the effort to recycle old prejudices about Catholicism as a false religion injurious to true American religion and to repurpose those prejudices against Joe Biden, I referenced Karl Marx's famous observation in The Eighteenth Brumaire that history repeats itself, the first time as tragedy, the second time as farce. And now we have another instance of that in the attempt to recycle and repurpose the bigotry of "Birtherism." The first time was Trump's repeated insinuation that Barack Obama, born in Hawaii in 1961, was really from somewhere else. The new version is that Kamala Harris, born in California in 1964, is nonetheless (contrary to the clear language of the 14th Amendment) not an American citizen because her parents were immigrants.

Besides contradicting the constitution's 14th amendment, which defines U.S. citizenship, that absurd argument would mean in practice that multitudes of life-long Americans have never been citizens. As correspondent Jim Geraghty has noted in (of all places) National Review, "Arguing that Kamala Harris is not an American citizen despite being born here and living here for almost all of her life is nonsense on stilts." Geraghty quotes another NR writer Dan McLaughlin, who apparently wrote back in 2018 that "birthright citizenship exists for reasons intrinsic to our American creed that ours is a society you join, not one reserved to those with an ancestral connection to the blood and soil."

Of course, a whites-only "blood and soil" identity politics is increasingly central to a certain vision of America being promoted today. hence this obsessive preoccupation with "othering" Americans who represent an alternative, more constitutional concept of American nationalism.

It's going to be a long road to November!