The Most Christian King 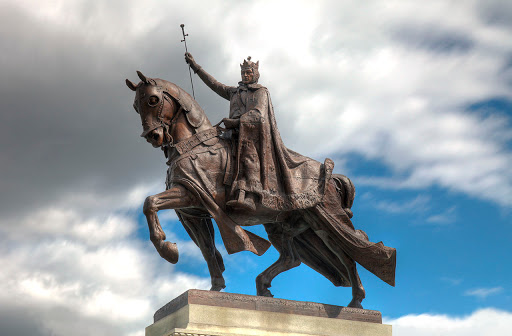 "The Most Christian King" (Rex christianissimus) was the traditional title of the French monarchs, 18 of whom were named Louis. How many lived up to the title may be debated, but there is little doubt about Louis IX (1214-1270), King of France (1226-1270), whose feast the Church celebrates today. Famous in his own time and since as a model medieval Catholic King, he still stands out as an example of piety lived out faithfully in a political role. The king himself was widely admired for his virtues, so much so that he was on occasion called upon to mediate quarrels among other rulers. He was canonized by Pope Boniface VIII in 1297, a mere 27 years after his death, the only French king ever to be canonized. He exemplifies the virtues of medieval Catholic spirituality and and political and social sensibility, as well as its inevitably time-conditioned characteristics and moral limitations.

When we learned about Saint Louis in school, invariably we learned how his mother, Blanche of Castille, who governed as regent in the early years of Louis' reign, supposedly said to him: I love you, my dear son, as much as a mother can love her child; but I would rather see you dead at my feet that that you should ever commit a mortal sin. Like most things medieval, such a saying seems strange to a modern sensibility, but it likely sounded right and proper and even loving to medieval ears. Louis himself seems to have taken his mother's admonition to heart to advise his own sin in similar terms: Keep yourself, my son, from everything that you know displeases God, that is to say, from every mortal sin. You should permit yourself to be tormented by every kind of martyrdom before you would allow yourself to commit a mortal sin.

Saint Louis is said to have sought advice from his contemporary Saint Thomas Aquinas. Although Louis was sometimes mocked on account of his piety as a monk king, he wasn't actually a monk (although he did recite the Divine Office every day during his period of captivity during his first crusade). When he wasn't away on crusade, Louis was a busy king. Thomas in turn was a busy friar. So, while we are reliably informed that their paths certainly crossed, we really don't know how often or how much But there is a very famous story of a banquet they both attended.

As a teenager, I read Louis de Wohl's memorable historical novel about Aquinas and his time, The Quiet Light (1950). Saint Louis is not a major character in the novel. He is there, mainly in the background, as a more edifying alternative to one of the main protagonists, the Holy Roman Emperor Frederick II (1194-1250), excommunicated in 1227 by Pope Pope Gregory IX, ostensibly for failing to honor his pledge.to go on crusade. As his contemporary nickname Stupor Mundi suggests, he was a pre-modern exemplar of what would later come to be called "enlightenment," the very opposite of the spiritual sensibility Louis represented. Accordingly, In De Wohl's novel one of the Dominican friars contrasts "Frederick, who takes greedily what God has given to others,," and Louis who"gives passionately what God has given him." Elsewhere in the novel, it is said of Louis, "that he would have liked to live for God alone and that only his sense of duty kept him on his throne."

But to me the most charming and relevant portrayal of Saint Louis in de Wohl's novel is the scene at that famous banquet, the ostensible occasion for which in the novel is the feast of Corpus Christi (for which, of course, it was Saint thomas who composed the texts for the Mass and Office). During the banquet, Thomas, apparently in some sort of widely observed contemplative trance, suddenly bangs his fist on the table and says "And that settles the Manichees." The King looks at Thomas and summons a scribe and directs him, "go to master Thomas over there - and take down the argument he just found lest he forget it." The narrator then reflects "that there was a special and personal kind of understanding between this King who might have been a friar and this friar who might have been a King. that they had something in common in which no one else in this hall had a share. that everyone else was dwarfed by them, almost to the point of nonexistence."

The image of the pious King listening to and learning from the friar seems so manifestly medieval, yet its contemporary relevance cannot fail to be noticed. Few qualities seem so starkly absent but no less necessary in a political leader today than the ability and willingness to listen and to learn.