Giving Up on God? 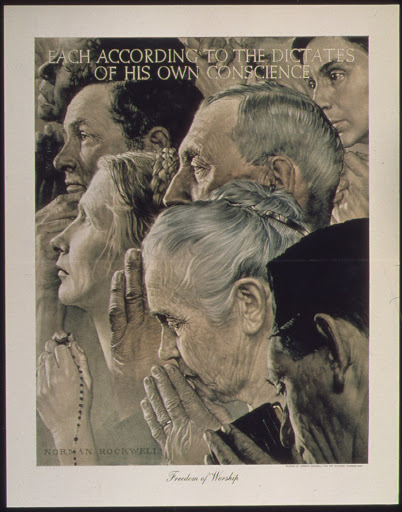 The world-wide decline of religion has been a perennial preoccupation of academics and non-academics alike. The survival of religion (especially in the United States) and recent reports of religion's apparent resurgence around the world have widely been seen as contrary evidence decisively undermining the classic (but also somewhat simplistic) secularization theories that once held sway in certain circles. Recently, however, that is, in the last decade or so, new data seems to suggest something different has been happening. One suggestive interpretation of that data is a recent article in the current issue of  Foreign Affairs (September/October 2020), "Giving Up on God: The Global Decline of Religion," by Ronald F. Inglehart (1934- ), a political scientist and Director of the World Values survey, a global social science network.

Findings from the author's earlier studies had "made it clear that industrialization and the spread of scientific knowledge were not causing religion to disappear, as some scholars had once assumed." So much for classic secularization theories! Since 2007, however, he notes that "things have changed with surprising speed," as more of the countries being studied seemed to become less religious. Even the U.S. - "long cited as proof that an economically advanced society can be strongly religious" - seems to have joined this trend. The author's basic finding is simply that "Growing numbers of people no longer find religion a necessary source of support and meaning in their lives." The most powerful force driving this trend, according to the author, "is the waning hold of a set of beliefs closely linked to the imperative of maintaining high birthrates. Modern societies have become less religious in part because they no longer need to uphold the kinds of gender and sexual norms that the major world religions have instilled for centuries."

There is a lot to unpack in that. Simply stated, the argument is that "the most important  force behind secularization is a transformation concerning the norms governing human fertility." In the past, "virtually all world religions instilled" what the author calls "pro-fertility norms in their adherents." They did so because it was necessary to do so in a world of high infant morality and low life expectancy. The 20th century changed that. Thus, "when a society reached a sufficiently high level of economic and physical security, younger generations grew up taking that security for granted." Whereas, "religion may have been the most effective way to maintain order and cohesion" in insecure societies, "modernization has changed the equation."

It is a commonplace, if oversimplified, critique to ask whether an alien from some other planet, who read the New Testament and then observed much of what contemporary American religion tends to talk about, might wonder what the two had in common. From a social scientific standpoint, this study situates that apparent disconnect in religion's historic role in supporting and maintaining civilization. What it also suggests, however, is that "as economic and technological development took place, people became increasingly able to escape starvation, cope with disease, and suppress violence" and so "became less dependent on religion - and less willing to accept its constraints."

On the other hand, as the author admits, "the future is always uncertain." Thus, a prolonged pandemic and/or another Great Depression could conceivably cause these seemingly irreversible cultural changes to reverse. Even so, he judges that unlikely, "because it would run counter to the powerful, long-term, technology-driven trend of growing prosperity and increased life expectancy that is helping push people away from religion."

But, between the pandemic and climate change, that "long-term, technology-driven trend" may well already be stalling or even going into reverse, in which case something will be needed to rebuild human solidarity to keep society and civilization going - in a world which is once again increasingly insecure. One could argue, as secularization theorists used to argue, that religion is now a spent force and cannot any longer make that essential contribution, that something else will have to do that. For now, however, it seems evident that that "long-term, technology-driven trend" tends to augment individualism at the expense of solidarity. It is hard to see how a world of "self-expression and free choice" can ever achieve the social solidarity necessary to cope with the consequences of climate change. After all, it can't even inspire people to care enough about each other to wear masks to cope with the current pandemic!

From a social-scientific standpoint, the prospects for religion to meet this social need may well be arguable. But, for now, it remains the only actually available alternative on offer in this threatening and increasingly insecure world.

(Photo: Norman Rockwell, Freedom of Worship - one of a series of four 1943 depictions of the "Four Freedoms" (of Speech, of Worship, from Want, and from Fear) from FDR's January 1941 State of the Union address.)