"Here We Are, All of Us Together" - The Gilded Age (Season Finale) 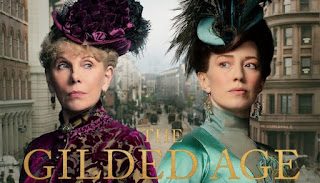 The Gilded Age: A Tale of Today was the title of an 1873 satirical novel by Mark Twain and Charles Dudley Warner (Twain's only co-authored novel). That novel satirized greed and corruption in post-Civil War American society. Its title has since became synonymous with the last quarter of the 19th-century in the United States and the greedy, materialistically stratified society and corrupt public life widely recognized as characteristic of that particular period. The Gilded Age is now also famously the title of the successful HBO series, supposedly set in New York in 1882 and created by Julian Fellowes (of Downton Abbey fame). I wrote about the series' first episode earlier, at:

Eight episodes later, The Gilded Age has lived up to the promise implicit in any costume drama "period-piece" of highlighting what was attractive in such previous eras - lavish lifestyles, beautiful clothes, and good manners (the latter two being especially notably lacking and rightly missed today).

In the season finale, George Russell having dramatically overcome two significant challenges to his financial and political power, Bertha Russell likewise succeeds in her over-the-top social ambitions. Gladys gets her ball at last and is now "out," but the ball was as much Bertha's ball as hers, her moment of triumph standing at long last next to Mrs. Astor, with Ward McAllister intoning, "Here we are, all of us together."

Less happily, Marion's heartbreak, which in retrospect was probably predictable, highlights the emotional toll of all this social stratification. But Marion seems primed to get over Tom, and (as watchers have likely long suspected) Larry (another Australian actor!) is at the ready to replace him, and is obviously a much more suitable substitute.

All's well that ends well - except perhaps for Peggy and her already fractured family, devastated by the discovery that her baby boy is alive.

The Gilded Age successfully recreates the social whirl and mores of late 129th-century New York high society in all its charming politesse and its roots in rapacious capitalist greed.

Five years after the supposed date of the HBO series, Edward Bellamy wrote another Gilded Age themed novel, Looking Backward, set in the year 2000 and (as an alternative to the greedy, materialistically stratified society and the corrupt public life of the Gilded Age) portraying a utopian, quasi-socialist society, in which the distinction between rich and poor has effectively been overcome and in which everyone under 45 must work (but only four days a week with lots of leisure time for high-brow pursuits). That pivotal year 2000 has come and gone, and we find ourselves nowhere near Bellamy's anti-gilded Age utopia. Instead, we are rapidly regressing back to the worst aspects of Gilded Age inequality and greed, without any of the benefits of high-minded leisure pursuits, let alone beautiful clothes and good manners!