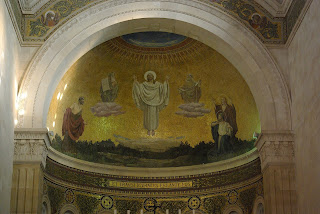 An ancient Christian tradition placed the mysterious event we call the Transfiguration [Luke 9:28b-36] 40 days before Jesus’ crucifixion., which may be one of the reasons we celebrate the feast of the Transfiguration on August 6 – 40 days before the feast of the Holy Cross – and also why we traditionally hear an account of it early in Lent each year.

Of course, the Gospel says nothing at all about how much time actually elapsed between the Transfiguration and Good Friday. We do know, however, that it occurred soon after Jesus’ 1st prediction of what awaited him in Jerusalem. Situated as a sequel to Jesus’ prediction of his Passion, the Transfiguration was apparently intended to confirm Jesus’ somewhat astonishing claim that his death would not be the end of the story and to prepare the disciples for the challenge of following Jesus on the way to the cross – yet another obvious reason to hear this story now, early in Lent.

For all its mysteriousness, the story itself is simple enough. Jesus and his special inner circle of Peter, John, and James went up the mountain to pray – mountains traditionally being the preferred places for divine revelation. So it was while he was praying, while modeling for us how to be in God’s kingdom, that this majestically mysterious event occurred – in effect, revealing the very God whose presence and action our prayer is our response to.

Joining Jesus in this tableau, the Old Testament’s two preeminent prophetic figures, Moses and Elijah appeared in glory and spoke of his exodus that he was going to accomplish in Jerusalem – a reminder that the Mount of the Transfiguration leads directly to the Mount of the Crucifixion.

Completely confused, Peter, blurted out the first thing that came into his head. Master, it is good that we are here; let us make three tents, one for you, one for Moses, and one for Elijah. Poor Peter, talking as if this were their final destination, rather than part of a longer journey to Jerusalem and the cross! Distracted by everything he was seeing, Peter, not surprisingly, missed the point. So, from the cloud came a voice, God the Father himself speaking to clarify the situation, telling the disciples - and that includes us, who like them are also so easily distracted – to listen to his Son, God’s chosen Son.

Although Peter had already said that he acknowledged Jesus as the Messiah, in fact he and the other disciples were still quite clueless as to what that really meant. Much like us perpetually distracted multi-taskers, Peter and the disciples desperately needed to listen, to learn what Jesus was going to accomplish for our sake on the cross. Listening, however, is not easy. There is so much competing for our attention – from war news to reminders to reset our clocks.

Authentic listening is never easy. It takes effort. How often - and how well - do we listen to one another? It’s taken for granted nowadays that most of our political debate in this country consists largely of people shouting at one another – or rather shouting past one another – neither side listening to the other. Listening is hard because it takes time and energy and a readiness to take seriously someone’s experience besides my own.

Likewise listening to the Lord is always a challenge. There is nothing automatic about it. But it is always essential – for the Church as a whole, and for each one of us - no less so than it was for Peter, John, and James!

The good news is that, even as Peter, John, and James listened (and, with them, we listen), to the lesson of the cross, they saw (and we see) in the transfigured glory of Christ, the first faint glimpse of the resurrection, already present in the frightening darkness in which we still find ourselves. That means the Jesus we need to listen to is not some figure from the past but the living Christ present in his Church as its Risen Lord, who affords us the confidence and encouragement we will need to navigate in the darkness.

Distracted as we all are by our preoccupation with ourselves, it is no less tempting for us than it was for the disciples to want to stay in a tent on the mountain and perhaps proceed directly to the resurrection.

In contrast to all such complacency, Lent is given to us each year to challenge us to listen to Jesus, to listen to his words and learn the lesson of his cross. Walking the Way of the Cross is a particularly powerful Lenten practice, intended to help us listen and learn the lesson of Christ’s passion. All our traditional Lenten practices – prayer, fasting, charity – are intended to help us to listen more attentively to Christ the living Lord present in his Church, and so to learn anew the lesson of his death and resurrection in our own lives.