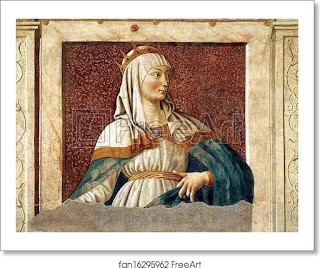 The Old Testament reading at this morning's lenten Mass (the Thursday of the first Week of Lent) is part of the famous Prayer ascribed to Queen Esther, the heroine of the biblical book which bears her name, who, having head from her Uncle Mordecai the terrifying news about the impending threat to the survival of the Jewish People, Queen Esther, seized with mortal anguish, had recourse to the Lord. To highlight the seriousness of the crisis, the context provided by the complete account in the Book of Esther (in what is commonly called "Addition C") tells us she took off her splendid garments (she was a queen, after all) and put on garments of distress and mourning.

(That's a nice nostalgic reminder that there once was a time - until quite recently in fact - when people dressed appropriately for the occasion, before the current tyranny of casual dress overwhelmed everything, driving yet one more nail in the coffin of civilized living.)

Esther's prayer is desperate, for the situation in which the Jews found themselves thanks to Haman's genocidal ambitions, was indeed a desperate one. It is also poignantly universal, expressing the sensibility of everyone who has ever felt threatened, alone, and abandoned.
"My Lord, our King, you alone are God. Help me, who am alone and have no one to help but you, for I am taking my life in my hand. ... O God, more powerful than all, hear the voice of those in despair. Save us from the power of the wicked, and deliver me from my fear."
Esther's prayer is one which could be prayed by anyone in serious anxiety about any impending evil - personal and private or political and public. The threat immediately facing the Jewish People was, of course, a political threat of national extinction. Hence the significance of Esther calling God Israel's King - presumably in contrast to the merely earthly sovereign whose royal rank she shared. But, while Esther seems to speak somewhat disdainfully of her royal (but Gentile) husband in her prayer, she is also well aware that it is her royal position which may be the means for her people's salvation. As her Uncle Mordecai himself had told her: "Who knows but that it was for a time like this that you obtained the royal dignity?"
We might well imagine pious Jews praying something like Esther's prayer at any of the many other threatening moments in their long national history, so often punctuated by persecution. In an analogous way, we might well imagine Ukrainian Christians today praying something like Esther's prayer in this decisively dangerous time in their national history. We might well imagine any of us praying something like Esther's prayer in moments of acute danger we may have experienced or maybe will experience. Perhaps for some the global covid pandemic may have called forth somewhat similar sentiments. The story of Esther reminds us that life, both personal and national, is indeed dangerous, that threats abound on all sides, that feeling endangered and threatened, alone and abandoned, may happen a lot more than we would prefer to imagine. But it teaches - and that is, after all, the point of the story (and presumably the point of the Church's use of it in her liturgy) - that God's providential care for his people is infinite and manifests itself in surprising ways. And it also teaches us (at least by example) not to disdain the natural, human opportunities social and political life affords us to benefit from God's providence in the here and now.
Photo: Queen Esther, fresco in Florence's Galleria degli Uffizi, by Florentine Renaissance painter Andrea del Castagno (c. 1419 – 1457).
Posted by City Father