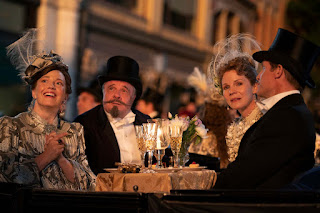 There is a scene in the most recent episode of HBO's The Gilded Age, a scene which, maybe more than any other, heralds the onset of the world we live in now. In that memorable scene (photo), Bertha Russell, Ward McAllister, Tom Raikes, Charles and Aurora Fane (all seated in their carriages) and Thomas Fortune and Peggy Scott (also on site but segregated) all stare in wonder and amazement (and, at least on McAllister's part, some prescient worry and sense of foreboding) at the new world being set in motion by the electrical revolution. For first time in human history, it had become possible to turn night into day, to illuminate the entire inside of a building at night as if it were outdoors at noon. That is the world we live in now and generally take for granted, such that we barely appreciate the difference darkness makes, the difference darkness has made for most people for most of human history, something we are reminded of only occasionally, as when war or some other calamity causes the power to go out and darkness is rediscovered.

Tonight's semi-annual ritual of changing the clock originated (and is still marketed) as part of our obsessive modern war against natural darkness. Modern life abounds in obsessive fantasies, of which the fantasy that we are somehow getting an "extra" hour of free daylight (when all we are doing is playing tricks with the clock) is just one of them, and by no means the most problematic. Actually, of course, the number of hours of light and dark don't change.  In exchange for an "extra" hour of light at the end of the work day, we get an extra hour of dark in the morning. The commercial interests that control our culture have consistently found that exchange to their benefit, even at the cost of school children forced to wait longer in the dark for the morning school bus and countless other such inconveniences. Back when I was a pastor and had to drive in the morning darkness to celebrate Mass at the local school on these March mornings and again on late October mornings, I was acutely aware of the impact of Daylight Saving Time's extra hour of darkness.

Now, however, it maters somewhat less to me personally. On the contrary, rising early but without (on most days) the familiar pressure to rush somewhere, I have come to savor the experience of sitting in silence in the early morning darkness. Even in busy, noisy New York, I am amazed at how quiet it is at that hour, at least in my small corner of the city. In the stillness, the early morning dark becomes a protective canopy permitting a reflective restfulness no other hour allows.

So while the world gleefully plays its semi-annual tricks with the clock, I will try to put that "extra" hour of morning darkness to good use in silent stillness.