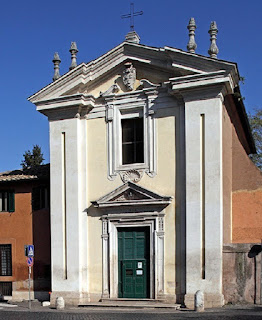 The 20th-century liturgical scholar Pius Parsch (1884-1954)  said of today’s great festival of Saints Peter and Paul: "it was the birthday of Christian Rome and marked the triumph of Christ's victory over paganism. Rome's provincial bishops came to the Eternal City to celebrate the feast together with the Pope. As at Christmas three services were held, at the graves of the two apostles and at their temporary depository in times of persecution. The two apostles were never separated; they were the two eyes of the Church's virgin-face."

Such splendor seems so far beyond us now, when this great festival seems barely noticed by many! Back when I was a pastor, I liked to preach on this day about Peter and Paul as the second founders of Rome - brothers in faith rather than by blood, who founded the new Christian Rome, that replaced the pagan power of ancient imperial Rome. That ancient theme may be acquiring a new salience in this troubled time when a right relationship between the Church and the pursuit of political power is again at issue.

According to tradition, the city of Rome was founded on April 21, 753 BC, by twin brothers, Romulus and Remus, whose father was Mars, the god of war. Like many of the biblical brothers, Romulus and Remus quarreled. The two fought about which of their future city’s hills to build on. According to the story, when Romulus began building on his preferred Palatine hill, Remus ridiculed his work by jumping over his brother’s wall, in order to belittle his brother’s project. Romulus responded by killing Remus - thus determining which brother the city would be named after! In due time, Rome became the greatest city in the ancient world, the capital of the greatest empire the world had ever yet known.

To that same city, some eight centuries later, came Peter and Paul - brothers not by blood, but by their common faith in Jesus Christ, who had called them to be disciples and commissioned them to be apostles. The small, marginal Christian community they found in Rome was socially and politically insignificant - an easy target when the Emperor Nero needed scapegoats to blame for a destructive fire that had occurred on July 18 in A.D. 64. What followed was the first of several state-sponsored persecutions of the Church. Among those eventually martyred in that first Roman persecution were the apostles Peter and Paul - Peter, crucified on the Vatican Hill, and Paul, beheaded on the Ostian Way.

One version of the story recounts how Peter started to flee from the city but then returned to Rome and embraced his martyrdom after meeting Jesus on the road. “Lord, where are you going,” Peter asked. “I am going to Rome to be crucified again,” Jesus responded. The Roman church [photo] of Domine Quo Vadis marks the site on the Via Appia, where this encounter occurred.

If the persecuted Christians of Rome required encouragement and confidence to persevere in their new faith, what more powerful reinforcement could they have had than the witness offered by the martyrdom of those two illustrious apostles, who were the Church’s link back to the Risen Lord himself? For some 20 centuries since, pilgrims from all over the world have flocked to the two great basilicas that rise above the apostles’ tombs - Saint Peter’s Basilica in the Vatican and the Basilica of Saint Paul’s Outside the Walls.

Which brings us back to where we started. The old Rome of Romulus – proud, powerful, pagan Rome, based on the murder of one brother by another – was, for all its real accomplishments and authentic grandeur, a human state like any other, a warring conqueror empire conquered in turn by other warring conquerors. The new Christian Rome of Peter and Paul conquered that old Rome, but in a new way. Proud, powerful, pagan Rome, founded on the murder of one brother by another, was itself in turn conquered by the faith that empowered Peter and Paul as brothers-in-Christ to evangelize an empire and die together as witnesses to a new way of life and a veery different kind of kingdom.

Just as there was an incomparable difference between the behavior of the two pagan brothers and the two Christian apostles, there is also an incomparable difference between their relationship to temporal power. The martyrdom of the apostles Peter and Paul – indeed all martyrdom – highlights how the establishment of God's kingdom comes about apart from (if not in outright opposition to) all earthly empires of political power and calls into question that perennially popular strategy of identifying religion with the pursuit of such political power.

As we celebrate this great feast recalling the mission and martyrdom of the Apostles Peter and Paul, let us also – as Saint Augustine once recommended on this feast – “embrace what they believed, their life, their labors, their sufferings, their preaching, and their confession of faith” [Sermon 295, 8].