The Pope at War 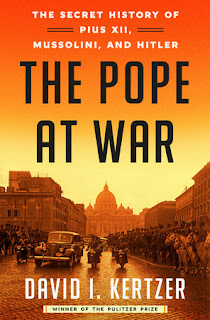 Historian David Kertzer, already famous for his Pulitzer-prize-winning The Pope and Mussolini: The Secret History of Pius XI and the Rise of Fascism in Europe (Random House, 2014), has now continued his account with the story of his successor, Pope Pius XII, The Pope at War: The Secret History of Pius XII, Mussolini, and Hitler (2022), in which he makes use of the Vatican wartime archives, sealed since Pope Pius XII's death in 1058 and recently opened in 2020. Cardinal Eugenio Pacelli (1876-1958) had served as Pius XI’s Secretary of State, even as the latter became more and more alarmed not just by Hitler's Nazi Germany but also by Mussolini's Fascist state in Italy, with which he had successfully negotiated the Lateran Treaty and Lateran Concordat in 1929. By the time of his death in 1939, Pius XI had become thoroughly disillusioned with Mussolini, who by then had become tightly allied with Hitler. Pacelli, elected to succeed him as Pius XII, was a lifelong diplomat who would prove much more cautious in dealing with both dictators.
Especially since Rolf Hochhuth's 1963 play The Deputy, but less publicly even while the war itself was still going on (as Kertzer demonstrates), there have been questions about and criticisms of Pius XII's diplomatic Neutrality and supposed "silence" the face of German aggression and war crimes, including but not limited to the Holocaust. The Pope at War presents a dramatic picture of what Pius did or did not do as Germany conquered most of Europe and the Nazis began their systematic mass murder of Jews and others. Whatever we choose to think of the Pope's (or anyone's) moral judgment and behavior during the war, the fact remains the Holocaust happened as a consequence of Germany's conquest of much of Europe, and the Holocaust ended the only way it could have ended, thanks to the Allies' overwhelming military victory and Germany's unconditional surrender. Sometimes some of Pius's critics sound as if Pius himself by sheer moral exhortation (and possibly by excommunicating both Hitler and Mussolini) could somehow have altered the history of the war. While all the evidence suggests that Pius XII never seriously considered excommunicating either Hitler or Mussolini, Kertzer believes that the Nazi leadership showed some concern he might. That said, I think it remains rather unlikely that such a move would have been any more successful than Pius V's infamous excommunication of England's Elizabeth I, which was a notorious failure.
One key component of the Pope's reserve, Kertzer suggests, was "the pope’s recognition that nearly half the citizens of the enlarged German Reich were Catholic, and millions of them were avid supporters of Hitler." He believes that Pius XII’s "silence" was motivated both by his "fears of the actions that the Axis powers might take against the church if he spoke out," but also "by his fears that denouncing the Nazis would alienate millions of Catholics and risk producing a schism in the church." Italy, on the other hand, may have been different. The ease with which the Italian fascist apparatus collapsed when the King finally removed Mussolini "shows how tenuous the Duce’s hold was on the Italian people in the end."
Indeed, Kertzer sees much of what went on through the filter of the Church's unique relationship with Italy. In fact, he considers the effort "to remember Pius XII as a heroic figure," as "part of a much broader effort to recast Italy’s uncomfortable Fascist past that goes well beyond the church."
That said, Pius's failure - if that is what it was - was not his failure to end the war or dramatically affect its outcome. His failure - if it was his failure - was what Kertzer calls a "moral failure." In the end the Pope proved successful at "protecting the institutional interests of the Roman Catholic Church at a time of war," and "the church came out of the war with all the privileges it had won under Fascism intact." These were, it ought to be recognized, real accomplishments. But, to achieve that outcome, "Pius XII clung firmly to his determination to do nothing to antagonize." However, Kertzer considers the Pope's policy to be a failure of moral leadership. and judges him a failure "precisely as a moral leader."
Thanks to his massive research, Kertzer present a very detailed account which allows the reader to evaluate the accomplishment and failures of the Pope's policies and the Holy See's wartime behavior in the context in which it occurred and how it was judged by people at the time. For that alone, his account is well worth reading. The ultimate challenge, however, is Kertzer's moral critique, which takes the issue beyond the realm of diplomacy and international politics and the art of the possible and moves it to a different standard suggested by the very nature of the Pope's unique office, which makes him - and our expectations of him - altogether different from a Roosevelt or a Churchill.
That very different standard and the expectations that accompany it remain perennially relevant, as reflected in the widespread reactions to Pope Francis' supposed reticence recently regarding Vladimir Putin.
Intellectual and political honesty requires dispassionate analysis of Pope Pius XII's behavior as a political actor with very limited and constrained options in a time of total war, which for a while looked as if it would end with total Nazi domination of Europe and then later led to the real possibility of Soviet communist domination of Europe. At the same time the moral question Kertzer raises requires a very different kind of analysis rooted in a radically religious understanding of the Pope's purpose - and the Church's - a purpose which cannot be confined to institutional survival and the effective exercise of diplomatic influence or political power, however valid and legitimate such considerations may sometimes seem.
.
Posted by City Father