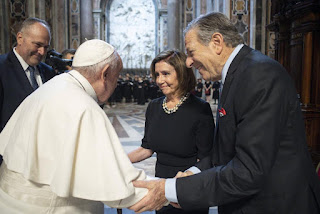 One common observation about Pope Francis, especially in the earlier years of his pontificate, was that he appeared relatively uninterested in matters liturgical (especially in comparison with his predecessor), a characteristic sometimes ascribed (fairly or unfairly) to his being a Jesuit! Whatever truth there may have been to those earlier interpretations, in recent years he has seemingly overcompensated, expressing renewed interest especially in promoting the uniformity of the Roman Rite in its post-conciliar form, something which presumably the Pope sees as integral to the larger post-conciliar project. His latest foray into the frequently divisive disputed terrain of the Roman liturgy occurred this week on the highly symbolic occasion of the annual celebration of Rome's apostolic founders Saints Peter and Paul. On that especially solemn day, Pope Francis issued an Apostolic Letter Desiderio Desideravi "On the Liturgical Formation of the People of God."

At the outset, Pope Francis makes clear both that the liturgy is "fundamental for the life of the Church" and that, rather than an exhaustive treatment of the subject, his purpose is to "aid in the contemplation of the beauty and truth of Christian celebration" [DD,1]. The letter begins with a meditation on the Last Supper and the Liturgy as a place of encounter with Christ. Of particular note is his stress that, while the world may not know it, "everyone is invited" to the feast, which only requires "the wedding garment of faith which comes from the hearing of his Word."

This turns out to be an explicit argument for evangelization. Explicitly referencing Evangelii gaudium, he warns: "We must not allow ourselves even a moment of rest, knowing that still not everyone has received an invitation to this Supper or knowing that others have forgotten it or have got lost along the way in the twists and turns of human living" [DD, 5]. Later he adds: "A celebration that does not evangelize is not authentic, just as a proclamation that does not lead to an encounter with the risen Lord in the celebration is not authentic. And then both of these, without the testimony of charity, are like sounding a noisy gong or a clanging cymbal. (1 Corinthians 13:1)" [DD, 37].

For Francis, the liturgy guarantees the possibility of encounter with the Risen Christ: "if there were not given also to us the possibility of a true encounter with Him, that would be to declare the newness of the Word made flesh to have been all used up. Instead, the Incarnation, in addition to being the only always new event that history knows, is also the very method that the Holy Trinity has chosen to open to us the way of communion. Christian faith is either an encounter with Him alive, or it does not exist" [DD, 10].

Having laid that groundwork, Pope Francis turns to  the more controverted territory of the modern renewal of the liturgy, which he interprets in terms of "the rediscovery of a theological understanding of the Liturgy and of its importance in the life of the Church" [DD, 16]. He considers "the Liturgy in its theological sense" to be "the most effective antidote against these poisons," those "distorted forms of Christianity," Gnosticism and neo-Pelagiansm, which he has often warned against [DD, 17-18]. Against the intoxication of the latter, he cites the Confiteor which at "the beginning of every celebration reminds me who I am, asking me to confess my sin and inviting me to implore the Blessed Mary ever virgin, the angels and saints and all my brothers and sisters to pray for me to the Lord our God" [DD, 20] However, he makes no reference to contrary practices (which the official liturgy itself supports), which widely replace this salutary Confiteor at the beginning of many Masses.

Lovers of liturgy will be edified by Francis' critique of an "attitude, which confuses simplicity with a careless banality, or what is essential with an ignorant superficiality, or the concreteness of ritual action with an exasperating practical functionalism." The Pope insists "every aspect of the celebration must be carefully tended to (space, time, gestures, words, objects, vestments, song, music…) and every rubric must be observed. Such attention would be enough to prevent robbing from the assembly what is owed to it; namely, the paschal mystery celebrated according to the ritual that the Church sets down" [DD, 22-23].

He is obviously well aware of abuses and diagnoses their root cause. "In visiting Christian communities, I have noticed that their way of living the liturgical celebration is conditioned — for better or, unfortunately, for worse — by the way in which their pastor presides in the assembly. We could say that there are different “models” of presiding. Here is a possible list of approaches, which even though opposed to each other, characterize a way of presiding that is certainly inadequate: rigid austerity or an exasperating creativity, a spiritualizing mysticism or a practical functionalism, a rushed briskness or an overemphasized slowness, a sloppy carelessness or an excessive finickiness, a superabundant friendliness or priestly impassibility. Granted the wide range of these examples, I think that the inadequacy of these models of presiding have a common root: a heightened personalism of the celebrating style which at times expresses a poorly concealed mania to be the centre of attention. Often this becomes more evident when our celebrations are transmitted over the air or online, something not always opportune and that needs further reflection" [DD, 54]. In the aftermath of the pandemic and the resulting prominence of live streaming, the Pope's call for reflection about this practice obviously acquires even greater salience!

The Pope's principal preoccupation, however, is not with those issues in themselves but with entire Church's appropriate formation for liturgy. What he himself terms the fundamental question," therefore, is this: "how do we recover the capacity to live completely the liturgical action? This was the objective of the Council’s reform. The challenge is extremely demanding because modern people — not in all cultures to the same degree — have lost the capacity to engage with symbolic action, which is an essential trait of the liturgical act" [DD, 27]. It is in the context of this contemporary problematic that the Pope places the conciliar reform (and the liturgical movement which led up to it).

Both "the non-acceptance of the liturgical reform" and what the Pope calls "a superficial understanding of it" are distractions "from the obligation of finding responses to the question that I come back to repeating: how can we grow in our capacity to live in full the liturgical action? How do we continue to let ourselves be amazed at what happens in the celebration under our very eyes? We are in need of a serious and dynamic liturgical formation" [DD, 31].

While not ignoring liturgical formation in the typical sense of that term - "A liturgical-sapiential plan of studies in the theological formation of seminaries would certainly have positive effects in pastoral action" [DD, 37] - the focus remains relational. "Only the action of the Spirit can bring to completion our knowledge of the mystery of God, for the mystery of God is not a question of something grasped mentally but a relationship that touches all of life. Such experience is fundamental so that, once seminarians become ordained ministers, they can accompany communities in the same journey of knowledge of the mystery of God, which is the mystery of love" [DD, 39].

Quite eloquently, the Pope proclaims that clearly "knowledge of the mystery of Christ, the decisive question for our lives, does not consist in a mental assimilation of some idea but in real existential engagement with his person." Thus, the "Liturgy is about praise, about rendering thanks for the Passover of the Son whose power reaches our lives. The celebration concerns the reality of our being docile to the action of the Spirit who operates through it until Christ be formed in us. (Cf. Galatians 4:19). The full extent of our formation is our conformation to Christ. I repeat: it does not have to do with an abstract mental process, but with becoming Him. This is the purpose for which the Spirit is given, whose action is always and only to confect the Body of Christ" [DD, 41].

Pope Francis also addresses the "absolute importance" of silence, as "a symbol of the presence and action of the Holy Spirit who animates the entire action of the celebration" [DD, 52]. He writes about liturgical gestures, for example, kneeling [DD, 53], and highlights the unique role of the priest, whose role "is not primarily a duty assigned to him by the community but is rather a consequence of the outpouring of the Holy Spirit received in ordination which equips him for such a task. The priest also is formed by his presiding in the celebrating assembly." [DD,56]. Thus, "it is of fundamental importance that the priest have a keen awareness of being, through God’s mercy, a particular presence of the risen Lord" [DD, 57]. As a priest, I could not but find the Pope's reflections on priestly presiding [DD, 59-60] particularly moving - and challenging.

The Pope concludes with another appeal to re-establish the unity of the Roman Rite [DD, 61] and "to rediscover the meaning of the liturgical year and of the Lord’s Day" [DD, 63]. Here, however, it might have been helpful for him to have addressed the dramatic cultural changes which have occurred since the Council and the resulting virtual disappearance of the Lord's Day from our modern society.

Finally, Francis appeals to us to "abandon our polemics to listen together to what the Spirit is saying to the Church. Let us safeguard our communion. Let us continue to be astonished at the beauty of the Liturgy. The Paschal Mystery has been given to us. Let us allow ourselves to be embraced by the desire that the Lord continues to have to eat His Passover with us. All this under the gaze of Mary, Mother of the Church" [DD, 65].

Notwithstanding the Pope's plea, polemics about the liturgy (and almost everything else) will continue. To the extent that liturgical polarization in the Church is a subset of wider social polarization, probably little can be done about it. On the other hand, a sincere study of the Pope's letter, coupled with an honest openness on all sides to address the acknowledged deficiencies in our contemporary liturgical experience could well contribute to restoring the liturgy to its proper place as an experience of unity rather than division.

Photo: Pope Francis greets U.S. House Speaker Nancy Pelosi in Saint Peter's Basilica before celebrating the Mass for the Solemnity of SS. Peter and Paul, Rome, June 29, 2022, the same day he issued his "Apostolic Letter on the Liturgical Formation of the People of God," Desiderio Desideravi.