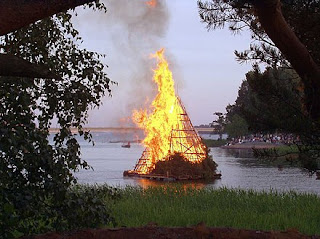 Typically, when major festivals coincide and one must be transferred, the transferal is to the next available day. But anticipating the commemoration of the Birth of Saint John the Baptist on Midsummer Eve this year just makes a lot more sense, since it keeps the connection with the festival’s ancient date and its cosmological symbolism. (An even better, if perhaps rubrically unthinkable  solution, might have been to keep the ancient festival of Saint John on its ancient date and move the modern feast of the Sacred Heart to some other Friday!)

The old Rituale Romanum provided a blessing for a bonfire on June 23, Midsummer Eve. People have historically reacted to the solstice in multiple ways, and even in our de-natured society some people still experience the seasons as significant. So this week I heard several people reference “the longest day of the year,” despite the obvious fact that “the longest day of the year” makes almost no difference at all to most people in our modern urban, electricity-determined lifestyle.

Meanwhile, even as we work our way through the hottest months of the year, the advent of the summer solstice also means that we will shortly begin to notice progressively less light as the days start to shorten and the nights start to lengthen once again according to their annual routine.

This other dimension of the solstice - decreasing daylight following soon after the year's longest day - invites us to a whole other level of symbolism, a symbolism especially associated with the commemoration of the Birth of Saint John the Baptist - the Christianized version of Midsummer Day. The reason John the Baptist's birth is celebrated at the time of the summer solstice has less to do with summer than with the fact that it is exactly six months before Christmas (in keeping with the New Testament chronology in Luke's infancy narrative).  Still, the occurrence of this feast at the time of the solstice inevitably invited a seasonal symbolism of its own, especially in light of John the Baptist's own famous words with regard to Jesus: He must increase, but I must decrease (John 3:30).

According to Anthony Aveni, The Book of the Year: A Brief History of Our Seasonal Holidays (Oxford, 2003), "Assigning the summer solstice, exactly six months away in the seasonal calendar from the birth of the Savior, to fete St. John the Baptist, is another brilliant example of religious syncretism. ... With that delicate stroke, midsummer, a pause in the breath of the seasons when the sun makes its seasonal turnabout, became a festival of water as well as fire."

To me, today’s anticipation of tomorrow's feast also heralds the hope (admittedly still several months away) that the dryness of summer will eventually yield to the autumn rains and the life-giving wetness of winter - nature's way of symbolizing the effect upon our spiritually dry and sterile world of the coming of Christ, whose mission it was initially John's - and is now that of the entire Church - to announce to the world.