The Moral Power of Institutional Commitments 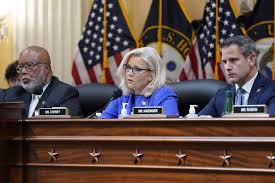 Recuperating from a morning medical test, I am treating myself to an afternoon with the House January 6 Committee's televised hearing. The focus today has been on the Trump campaign's unconscionable attempt to illegally influence the election's outcome at the state level - notably in Arizona and Georgia. The witnesses called to testify today have been elected state officials in Arizona and Georgia and an election worker in Georgia who experienced threats and harassment for merely doing her job.

What does it say that the "heroes" who helped save the country from Trump's effort to secure for himself and illegal second term were, for the most part, politicians and ordinary people who were just doing their jobs? In recent days, there has been an inordinate amount of debate about how to evaluate former Vice President Pence's behavior, about whether his merely fulfilling his constitutional duty somehow counts as heroism. Of course, anytime anyone's life is threatened to intimidate him to violate his constitutional responsibilities and/or to punish him for having done his duty, the official in question can be said to have displayed some degree of courage. Most of us have likely never been in such a position. So it ill behooves us from a position of safety to denigrate the real courage it can take merely to do one's job and fulfill one's duty in the face of threats and intimidation. In that sense, certainly, Vice President Pence acted courageously - even more obviously so in his insistence on remaining in the Capitol throughout that dangerous day. An analogy might be a certain 3rd-century anti-pope who ended up a martyr, the latter experience compensating, so to speak, for his earlier errors.

That said, however, history cannot completely pass over the iniquities characteristic of Vice President Pence's behavior as a Trump-enabler during the 2016 and 2020 campaigns and during his term as Vice President. Pence proved to be a consistently loyal enabler of Trump's tragic presidency. Recognized for his right-wing religious self-righteousness, Pence was perhaps a primary actor in facilitating the acceptance of Trump and Trump's behavior among the Republican party's supposedly religious, Christian evangelical elements prior to and during Trump's ill-fated presidency. If, on January 6, Trump erroneously expected Pence to put loyalty to him above anything else, perhaps he had reason to have such hope based on Pence's slavish servitude to Trump until that point. One easily gets the impression that Pence might have preferred to escape having to decide what to do and only acted publicly when he had no choice. Obviously, that is not completely contemptible. One could perhaps say something similar of Saint Thomas More, who avoided publicly opposing Henry VIII until the King left him with no other choice.

What such cases actually suggest, however, is that, while the individual's personal commitment and courage were essential to the outcome, what facilitated that was an underlying institutional commitment. Because of that commitment, Pence did what he knew to be the only thing the constitution actually allowed him to do - once he found himself with no other options. In spite of years of servile subservience to Trump, Pence suddenly found himself in an unavoidable situation in which he had no choice but to act, in which case his institutional loyalty and commitment won out.

Obviously, this whole sorry story highlights the importance of having people in such positions who take their institutional commitments seriously. But it also highlights the importance of first having such institutions - institutions important and powerful enough in our political and moral imagination to compel our loyalty to them to take precedence over alternative courses of action. Ordinary people aspiring to moral virtue require a clear conception of what moral virtue commits them to.

Central to such a political and moral American imagination is institutional commitment to the constitutionally constructed responsibilities of one's office and to a constitutional political culture which valorizes the priority of legal elections and the peaceful transfer of power, recognized as such by winners and losers alike. Allow that to be weakened, and we weaken as well the very framework within which individual officeholders and citizens are able to recognize a duty to resist any kind of coup.