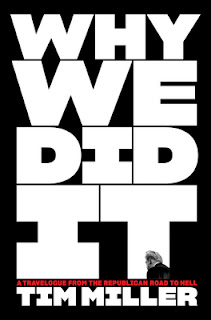 Early in Why We Dild It: A Travelogue from the Republican Road to Hell (Harper Collins, 2022), former Repuiblican political consultant Tim Miller tells a story that effectively captures the picture he is painting of the modern Republican party. He recalls how "the RNC for years has been sending out unconscionable mailers to every elderly conservative in America. These letters are made up almost exclusively of hyperbole and ad hominem and conspiracies. They add absolutely zero to the political discourse. But they “work” in the sense that they are effective at keeping the olds upset so that they continue sending in their Social Security money." At one point during his time working at the RNC he was tasked with “approving” these mailers. He struck out whatever he thought would be embarrassing if it fell into the hands of a reporter. "One day I was summoned to the chief of staff’s office, and we had a standoff over how much to cut, which the fundraisers won and I lost (of course). As long as the mailers were “working” and money was coming in, the boss figured there was no reason to rock the boat, unless I could prove that this was likely to yield bad press. I tucked my tail and rubber-stamped whatever nonsense they sent through, figuring that if it did become a controversy, I had already said my piece."

The point of Miller's telling this story is two-fold. First, "the fact that at no point in the dispute was there a discussion of whether we should be sending out a letter that was filled with lies and slander. Or the ethics of snaffling a few quid from the Greatest Generation. That was just the baseline. This letter was part of the Game. The only judgment call the chief of staff was asked to make was to balance whether the donations would be worth the potential embarrassment. And the answer was yes." Second, that he was a willing collaborator in that behavior. Regarding that long-term danger, he notes that the "standoff" he had with the RNC chief "looks quaint in comparison to what is the standard operating procedure of basically every political campaign and committee in the country today—on both sides. They all just accept without hesitation that wheels-off missives about how the end is nigh if the other team wins are not just kosher but required."

That story is one of many which illustrate the fundamental theme of this book, succinctly stated in the Introduction: "America never would have gotten into this mess if it weren’t for me and my friends." This "is a book about the people who submitted to every whim of a comically unfit and detestable man who crapped all over them and took over the party they had given their life to. It’s about the army of consultants, politicians, and media figures who stood back and stood by as everything they ever fought for was degraded and devalued. The people who privately admitted they recognized all the risks but still climbed aboard for a ride on the SS Trump Hellship that they knew would assuredly sink."

One motive for doing this, for participating in this appalling form of politics seems to be the sheer excitement of it all - "Getting calls. Feeling important. Remaining relevant. Being In The Mix." Decades ago, when I was in graduate school, such people and their antics were routinely looked down upon from the olympian heights of political philosophy and academic scholarship, although (then as now) I recognized the element of jealousy in that disdain toward those consultants, staffers, and other operatives who were actually having an impact in the wider world (and also seemed to be enjoying it). There is, of course, a long and honorable tradition, going back to Plato, of service as counselors to those who wield actual political power. Miller's book merely confirms the enormous abyss between such philosophical fantasies and the contemporary political swamp.

Miller presents himself as one of those smart, cool characters, who can be expected to thrive in such settings.  He highlights how for those "who worked primarily in campaigns or political jobs in D.C.," it is “the Game” that separates what they do from what the “wonks” or “careers” or lawyers do. "We specialize in strategy, tactics, messaging, advertising, opposition research. Slaying the enemy. Winning the race. They undertake the mundane business of governing," where apart from "the foreign policy arena and the high-stakes world of diplomacy and international intrigue, there is not a lot of sex appeal in 'governing'.”

Miller's description of the evolution of the Republican party during the year's he actively worked in politics is well known. It is the familiar tale of "how the Republican ruling class dismissed the plight of those we were manipulating, growing increasingly comfortable using tactics that inflamed them, turning them against their fellow man. How often we advanced arguments that none of us believed. How we made people feel aggrieved about issues we had no intent or ability to solve. How we spurred racial resentments and bigotry among voters while prickling at anyone who might accuse us of racism. And how these tactics became not just unchecked but supercharged by a right-wing media ecosystem that we were in bed with and that had its own nefarious incentives, sucking in clicks and views through rage hustling without any intention of delivering something that might bring value to ordinary people’s lives."

What is actually most telling in this account is how he characterizes the different types who engaged in this sort of activity and the motivations he ascribes to their remaining into and through the Trump era. "This brings us to our second, more complex psychological journey. After our past sins were anthropomorphized into an Archie Bunkeresque president, what to make of those who saw his defects clearly and went along anyway?" Miller uses various picturesque terms to categorize them - Messiahs and Junior Messiahs, Demonizers, LOL Nothing Matters Republicans, Tribalist Trolls, Strivers, Little Mixes, Peter Principle Disprovers, Nerd Revengers, Inert Team Players,  Compartmentalizers, and Cartel Cashers.

Some of the personal stories about some of these various types of characters are interesting, although after a while the pattern is familiar and they all tend to merge into one common and increasingly unattractive picture. It is a devastating indictment of the Republican party and of the party establishment class of which Miller was for so long a part. But it is also a deeply wounding indictment of the whole enterprise of the so-called "Game" of professional political consultants, campaign staffers, and other political operatives. The pseudo-intellectual, academic snobbery some of us absorbed back in grad school in the 1970s may have been a nerdy cultural snobbery based in large part in jealousy, but it turns out it also wasn't all that off the mark!