An Emperor for All Ages 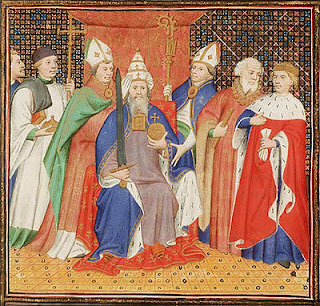 Today the Church commemorates Saint Henry II, who lived from 973 to 1024. Also known as "Saint Henry the Exuberant," he succeeded his father as Duke of Bavaria in 995, became King of Germany in 1002, King of Italy in 1004, and was crowned Holy Roman Emperor by Pope Benedict VIII in 1014 (image).

Henry II supported service to the Church and promoted various monastic reforms. He strongly enforced clerical celibacy, fostered missionary activity, and establshed several charitable foundations for the poor. Wishing to become a monk, he ordered the Abbot of Verdun to accept him in his monastery, whereupon the Abbot ordered him, in virtue of the vows he had professed, to continue ruling his empire. Henry II fulfilled his duties believing that temporal power was given by God to serve the good of the people. He was canonized in 1147, and is the only Holy Roman Emperor commemorated in the universal Roman-Rite Church calendar. His wife, Empress Cunigunde, was canonized in 1200, making them among the handful of married couples who are venerated as saints by the Church.

As an Emperor, Henry highlights the special virtues associated with being a statesman, with exercising political power in the world.

As committed Catholic Christians, we also share with our fellow citizens in the benefits and the responsibilities of citizenship in 21st-century society. What resources does our faith offer us to participate in civic life? What lessons from centuries of Catholic spiritual and intellectual tradition and the experience of Catholic history can we share with our fellow citizens? What can we do together to promote the common good and care for our common home? The evident seriousness of the issues facing present and future policy makers make it all the more essential for us to take part in these important debates and to bring to them the particular perspectives of our rich Catholic faith and experience.

The New Testament emphasized that our religious obligations to God, while always absolute in themselves, do not cancel out our membership in civil society and our resulting obligations to the political community we all share. In this traditional understanding, political choices – such as whom or what party to vote for, who should benefit from tax policies, what to spend on and what to cut in the budget, and how to relate to other nations and states in the world community – all such choices are ultimately moral choices that express what we value. Such choices identify whom we care about enough to include (or not), and highlight what kind of nation (and world) we want to be.  As Catholics and citizens, we need to be particularly attentive to this dimension of political decision-making. As Catholics and citizens, we need to respond to the challenges of voting and other political choices in a morally serious way that transcends simplistic sloganeering and emotional appeals to narrowly defined secular identities and group interests. While we may freely choose different ways to respond to compelling social problems, but we share a common moral obligation to help build a better world through morally acceptable means.