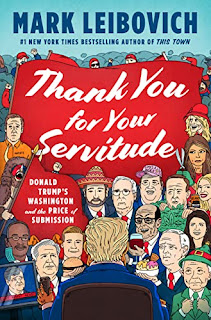 Currently a staff writer at the The Atlantic, Mark Leibovich previously spent a decade as the chief national correspondent for The New York Times Magazine, based in Washington, D.C., whose political culture he notoriously profiled in the 2013 New York Times bestseller This Town. Now he has brought the same story-telling and personality-profiling talent to yet another account of our long national Trump nightmare, Thank You for Your Servitude: Donald Trump's Washington and the Price of Submission (Penguin, 2022), focusing particularly on the GOP and how the Republican party collaborated with Trump, turning the party into a dangerous sycophantic personality cult.

As everyone remembers, back in 2015 and into 2016, Republican "establishment" leaders and presidential hopefuls were one in their disdain for candidate Trump - until he won. Not necessarily converted privately, but rather, as some conceded to Leibovich, "in on the joke," Republicans greater and lesser, all desperate to preserve their "relevance," readily did whatever it took (and still takes) to maintain their position, at the cost to the country of enabling and empowering the most dangerous president in American history.

The title of the book is obviously a pun on the widespread one-liner used to show appreciation (real or pretend) to veterans, that small minority of Americans who have actually shouldered the full responsibility and burden of citizenship. Replacing "service" with "servitude" says clearly what this pseudo-appreciation of Trump's Republican sycophants is largely about.
Leibovich employs the literary device of composing his account as a view from Washington, DC's Trump Hotel, "his flagship payola palace at 1100 Pennsylvania Avenue," which Leibovich calls "a one-stop destination for all the busy parasitic suck-ups who made the Trump-era swamp work for them. This was a tidy operation in an untidy time. The age-old D.C. sport of self-dealing, social climbing, and self-promotion had never enjoyed such a garishly centralized arena." Throughout, the author's focus falls less on Trump himself (already the subject of so many accounts) than on those "busy parasitic suck-ups," like house Minority Leader Kevin McCarthy, whom he quotes "Never Trump conservative Bill Kristol" as calling “the piano player in the House Republican brothel.” Thus his approach is to tell the story "through the supplicant fanboys who permitted Donald Trump’s depravity to be inflicted on the rest of us." He wants "to catalog their descents into servitude as they made their deals and swallowed their pride, such as it was."
In the process, of course, he recounts the by-now familiar story of Trump's rise and the Republican Establishment's fall, "the insane fantasy that an all-powerful Republican 'establishment' could swoop in and impose its will," the woeful fact that, in Al Franken's words, "celebrity trumps ideology." That said, he also want to recognize "the idea that someone like Trump was what change had to look like in American politics today given the perverse state it found itself in. Perhaps it took one joke to expose the other, long-marinating joke, the one that both parties in Washington had been perpetrating on America for decades." It is a paradoxical fact that for many voters "Trump was refreshing in that it felt as if he were telling them the truth. I heard this time and again: that Trump was a truth teller, despite his lying." Indeed, Trump's "main appeal," to some seemed "as a tool of revenge."
This is, as I've already suggested (and the author himself acknowledges) somewhat familiar ground. Hence the heart of his story remains what he calls a "symphony of sycophancy," of which "the unquestioned maestro" was Vice President Mike Pence, whose story highlighted "his capacity for opportunism and careerism."
Leibovich is especially effective in highlighting the contrasts to this overwhelmingly dominant Republican behavior. "But we also know, thanks to the example of Ukraine, what true sacrifice, valor, and patriotism look like. The country has provided a stirring reminder: a brave president who truly is “fighting right there with you” alongside his people, and in pursuit of a great and vital cause." While Trump was still in office, such contrasts were provided by the two funerals the punctuated the Trump presidency - that of Senator John McCain in August 2018 and that of President George H.W. Bush in December. Among other things, he makes the interesting observation (which could perhaps serve as yet another principled argument for aristocracy) that "how politicians who descend from famous lineages" — not just McCain and bush, but also the likes of Liz Cheney and Mitt Romney — "tend to place greater weight upon notions of history and reputation than others who do not."
In contrast, for the figures featured in this account, such considerations seemed significantly absent. "I once asked Kevin McCarthy some variation on the 'Do you worry about how history will judge you?' question, and he looked at me as if I had three heads." And this typically revealing quote from Rudy Giuliani, "“I don’t care about my legacy.” Leibovich sees such sentiments as expressing what he calls the "resigned nihilism" that "had overtaken the GOP." thus, Trump's first impeachment process highlighted "the sad state of the Washington 'debate,' such as it was," in which "Trump’s Republican attendants barely bothered to contest the most basic claims of wrongdoing against their proprietor."
Leibovitch's sense of apocalyptic danger is well captured by the longtime Republican senator from Wyoming, Alan Simpson, now 90, whom he quotes as saying, “We’re not really talking about common sense or even politics anymore in my party.” he describes Simpson as "beside himself at what he calls 'the tragedy of what has occurred' at the hands of 'this vicious animal who has poisoned our democracy'.”
Leibovitch's gripping account of "the accomplices who make Trump possible" provides a compelling challenge to all political actors (including those whose political action is confined to voting) to rediscover a commitment to authentic politics in this increasingly apocalyptic time.
Posted by City Father