A Perennially Powerful and Necessary Devotion 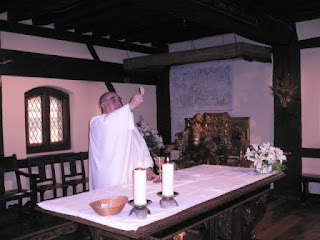 This Sunday, the anniversary of the death of Saint Ignatius Loyola (1491-1556) marks the conclusion of this Ignatian Year commemorating the 500th anniversary of Saint Ignatius Loyola's redirection of his life. That crucial conversion experience was associated with Ignatius' period of convalescence in his family's castle, in what is now a chapel where I have twice been privileged to celebrate Mass (photo) and venerate the relic of the saint's head. (The celebration of this special Ignatian Year began in Pamplona, Spain, over a year ago on May 20, 2021, the actual anniversary of Ignatius' injury during the Battle of Pamplona.)

As was announced several weeks ago on the Solemnity of the Sacred Heart, as part of Sunday's solemn conclusion of this Ignatian Year, Fr.. Arturo Sosa, the current Jesuit General, will rededicate the Jesuit order to the Most Sacred Heart of Jesus, a deeply rooted Catholic devotion which has long been especially associated with the Jesuits.

The Jesuits actively promoted devotion to the Sacred Heart both before and after their tragic suppression. In 1853, Sosa's predecessor as Father General, Peter Jan Beckx, consecrated the Society to the Sacred Heart. Thirty years later, the Jesuits' 23rd General Congregation  decreed: "We declare that the Society of Jesus accepts and receives with a spirit overflowing with joy and gratitude, the gentle burden (munus suavissimum) that our Lord Jesus Christ has entrusted to it, to practice, promote and propagate devotion to His most divine Heart” (Decree 46).

On June 9, 1972,  the Jesuit General Servant of God Pedro Arrupe renewed the Society's consecration to the Sacred Heart, which he said makes Jesuits know the person of Christ more intimately and makes them more authentically Ignatian companions of Jesus. For over a century, the Jesuits have promoted devotion to the Sacred Heart in a particular way through the Apostleship of Prayer (since renamed the Pope's Worldwide Prayer Network), in accordance with the 26th General Congregation, Decree 21, in 1915.

Shortly after his election, Pope Francis, the first Jesuit Pope, referred the Sacred Heart as "the greatest human expression of divine love" and "the ultimate symbol of God’s mercy," a symbol "which which represents the center, the source from which salvation flowed for all of humanity" (Angelus Address, June 9, 2013).

Thus, the great 20th-century liturgical scholar Louis Bouyer observed: "The focusing of Christian contemplation on the Sacred Heart was certainly motivated by an authentic sense of that deep unity of all Christianity in the unity of the Mystery itself as being, finally, the revelation of divine love made to us in the wounded and glorified Humanity of our Lord" (Liturgical  Piety, 1955, p. 331).

Historically, the Jesuits were the great opponents of Jansenism, and the devotion to the Sacred Heart was (and is) a profound counter to that pernicious early modern heresy. As Pope Pius XI noted in 1925, "the feast of the Sacred Heart of Jesus was instituted at a time when men were oppressed by the sad and gloomy severity of Jansenism, which had made their hearts grow cold, and shut them out from the love of God and the hope of salvation" (Quas Primas, 23).

In fact, in this world in which there is so much suffering, sadness, injustice, and alienation, there may be many, emotionally explicable reasons why people may lack confidence in God's love for them. Jansenism insidiously offered an intellectual rationalization for such feelings. As the blogger Joseph Heschmeyer has written: "It’s not just that Jansenism got the details of predestination or contrition or sacramental reception wrong. It’s that Jansenism got God wrong, in a fundamental way that many of us still get him wrong today" (Shameless Popery, June 12, 2021).

That the Divine Person of Jesus has a human heart, the human attribute we symbolically associate with love, compassion, and mercy, is God's permanent response to all such distortions. Thus understood, this mystery of the Divine Person of Jesus' human Heart is how Christian faith answers the seemingly unavoidable suffering, sadness, injustice, and alienation of human life. Hence the perennial power of this doctrine and practical devotion.