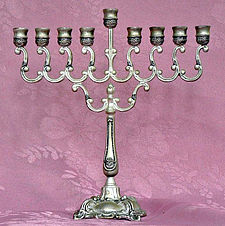 The Jewish holiday of Chanukah begins Saturday night. Growing up in New York City, I was always aware of all the major Jewish holidays. Chanukah, of course, is not a major Jewish holiday. It is not prescribed in the Torah, like the "pilgrimage" feasts of Pesach (Passover), Shavuot (Pentecost), and Sukkot and the autumn "high holydays" of Rosh Hashanah and Yom Kippur. Moreover, the historical event on which Chanukah is based is not even included in the Jewish Bible  - although it is found in the Catholic one (1 Maccabees 4:36-59). On top of that, the popular Talmudic story of how a single-day’s supply of oil for the Temple’s menorah miraculously lasted for eight days only appeared about 600 years after the events described in the books of Maccabees.  More pointedly, perhaps, the prohibition of work associated with the Sabbath and the really major holidays does not apply to Chanukah.

It seems pretty obvious that Chanukah became as big as it is in the U.S. in the 20th century as a kind of Jewish alternative to the overwhelmingly omnipresent Christmas holiday. Thus the tradition of giving Chanukah geld to children could easily evolve into full-scale gift-giving analogous to Christmas. Even so, Chanukah’s popularity seems deeply rooted. A 1960s radical friend of mine once told me how his family was non-religious and celebrated no Jewish holidays – with the one exception of Chanukah, which his socialist father considered a common people’s holiday. As for Jesus, presumably he too observed Chanukah, along with the other Jewish festivals, for the New Testament mentions both the festival and his presence: The feat of the Dedication was then taking place in Jerusalem. It was winter. And Jesus walked about in the temple area on the Portico of Solomon (John 10:22-23).


The 20th-century restoration of Israel as a Jewish state has also been a boost for Chanukah, which originated after all as a commemoration of the rededication of the Temple after the Maccabees’ victory over King Antiochus IV, who had profaned it and outlawed Jewish religious practices. The 2 books of Maccabees recount the heroic resistance of the Jewish people under the military leadership of the Maccabees, as well as the sufferings of Jewish martyrs. For modern Israel, it undoubtedly serves as a good nationalist holiday – especially given the constant threats to Israel’s existence. Last month’s anti-Israel action by that institutionalized expression of international immorality, the United Nations, highlights the relevance of Chanukah for Israel and all people of good will who support its survival against enemies every bit as implacable as Antiochus IV.

I'm told that pre-modern rabbis often downplayed the military and nationalistic dimensions of the holiday, and that the emphasis on the story of the miraculous oil may have served as an alternative - more edifyingly "spiritual" - emphasis (a particularly practical approach, perhaps, during the long centuries of exile under Gentile rulers). With the 20th-century restoration of Israel as a Jewish state, the holiday's original historical significance has, naturally enough, undergone a revival, and both the Zionist theme of Hewish national liberation and the universal theme of cultural and religious freedom have moved to center stage. Meanwhile, the survival of the festival's popular, folkloric customs - like potato pancakes - adds to the permanent appeal of the holiday.

Like the autumn harvest festival of Sukkot, which the New Testament typically calls the Feast of Booths or Tabernacles, Chanukah has no real Christian analogy. The relationship between Passover and Easter (and between Shavuot and Pentecost) is genuinely theological, but there is nothing in the Christian calendar corresponding to Sukkot or Chanukah. The coincidence of Chanukah with Christmas is largely just that - coincidental. They are, to be sure, both winter light festivals; but it was most likely a pagan, Roman winter feast which inspired the dating of Christmas. Chanukah did not inspire Christmas. (If anything, as has been said, the reverse is true in the case of the contemporary American Chanukah celebration).
That said, the fact that Chanukah and Christmas are both winter light festivals does suggest one important point of contact. Amidst all the bright lights of the modern Christmas season, Chanukah focuses on the special candelabrum (known as a chanukkiah), which, unlike an ordinary menorah, has eight candles (plus an additional shamrash candle). The chanukkiah is supposed to be at a window, where it can be seen from outside, so others can see it and be reminded (catechized?) about the Chanukah miracle.
Now I think that most people put their Christmas Tree near a window whenever possible. Like the more modern displays of lights outside of houses, putting the tree near a window enables its light to be seen by others outside. Perhaps, we Christians need to be more intentional about seeing our Christmas lights as vehicles of evangelization, symbols of Christ, the light of the world, catechizing everyone outside about his coming into our world. As I have often observed, there is no other time of year when our homes and cities are as beautifully decorated and illuminated as at this season. So we need to let the lights and symbols of the season speak out the good news of great joy for all the people (Luke 2:10).