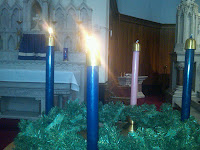 In the old translation, the 2nd Eucharistic Prayer for Reconciliation (“R2” on the Missal Tabs) ended with an attractively inviting, eschatological sentence: In that new world where the fullness of your peace will be revealed, gather people of every race, language, and way of life to share in the one eternal banquet with Jesus Christ the Lord. (This is perhaps one of the very few places where I really rather liked the old translation over the new one, but that is another discussion!).

The whole prayer was exceptionally well written and inviting, one reason, I suppose for its popularity – and one reason, perhaps, why R2 tended to get used a lot at the church where I served as a deacon in the early-mid 1990s. When I returned there in November 1995 for my 1st Solemn Mass as a newly ordained priest, I used R2 – in part because of its known familiarity for that congregation, in part because in the circumstances its Preface in particular seemed to speak suitably healing sentiments that especially seemed to fit that occasion.

In the years since, I have often returned to R2 – especially during Advent. If R1’s reference to Christ’s crucifixion as the lasting sign of God’s covenant makes it especially appropriate for Lent, R2’s – we bless you through Jesus Christ your Son who comes in your name – resonates well with the themes of the Advent season. So I have often employed it as my preferred Eucharistic Prayer in Advent. Last year was something of an exception. Focused as I naturally was last year on learning the words of the new translations, I stuck with Prayers I and II and III. This Advent, however, I have started using R2 again. I especially like the way R2 speaks of Christ’s unique and outreaching mediation – as the Word that brings salvation, the hand you extend to sinners, the way by which your peace is offered to us – not as someone who does those things but as someone who is those things, no as someone who does reconciliation but as someone who is reconciliation.

In the same vein, R2’s post-consecration, anamnesis-offering prayer proclaims the Christ being offered to his Father as the Sacrifice of perfect reconciliation. We routinely talk today about reconciliation, but our efforts inevitably fall far short of perfect reconciliation. To speak of the Eucharist as the setting through which the Christ’s Spirit takes away everything that estranges us from one another expresses in an earnestly vivid image the undoing of the alienation at hear to human existence – Adam estranged from God, Adam estranged fro Eve, Cain estranged from Abel.

One can, of course, speak the language of reconciliation anytime. What makes R2 so right for Advent is the way it so well captures the perennially Advent-like character of our existence in this interval (as I like to say) between Christmas and the end. Its expansive language - those of every race and tongue who have died in your friendship - highlights what we hope that end will be like but also focuses on what (with that end in view) we are supposed to be about in the here and now, which makes it thus a truly evangelization-oriented prayer. As the present Pope (when he was still Cardinal Ratzinger) wrote: "The Church ... has a task to perform for the world ... her disappearance would drag humanity into the whirlpool of the eclipse of God and thus, into the eclipse, into the destruction, of all that is human. We are not fighting for our own survival; we know that we have been entrusted with a mission that lays upon us a responsibility for everyone" (Pilgrim Fellowship of Truth: The Church as Communion, ed. Horn and Pfnur, tr. Henry Taylor, 2005, p. 287).