O Mary conceived without sin, pray for us who have recourse to thee! 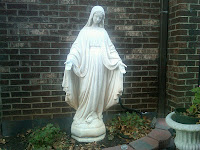 When I was in grade school, that invocation and response were a regular part of our school prayers. Although I dutifully responded pray for us who have recourse to thee, in fact for many of those years I had no clue what the word recourse really meant. Given the high quality of religious instruction then, my guess is that I understood the meaning of the doctrine of the Immaculate Conception before I ever got around to understanding the meaning of the word recourse!
When, in 1858,  the Blessed Virgin Mary appeared to St. Bernadette Soubirous in a very cold and wet, little town of Lourdes in the Pyrenees Mountains, she identified herself with the words, “I am the Immaculate Conception.” Bernadette did not recognize the reference or understand its meaning. No surprise there! Intellectuals had been arguing about their meaning for centuries. In 1497, the University of Paris had even decreed that no one should be admitted to the University without first swearing to assert and defend Mary’s Immaculate Conception! (Presumably that requirement is no longer in force at the Sorbonne!).


In 1846, the U.S. bishops unanimously chose Mary, under the title of her Immaculate Conception, as Patroness of our country. Eight year later, in 1854 Blessed Pope Pius IX finally infallibly defined the essence of the Church’s belief about Mary’s Immaculate Conception – the Church’s faith that, thanks to the salvation Jesus accomplished on our behalf, Mary was preserved from sin, from the very beginning of her existence, and so was from the very start completely holy. She is, as the English Romantic poet William Wordsworth [1770-1850] famously called her “Our tainted nature’s solitary boast.” Meanwhile, two months after Pius IX’s dogmatic definition, the small and struggling Catholic community in Knoxville, TN, purchased a lot on Summit Hill outside the town’s northern limits intending to build their first parish church there. At its dedication later that year, the church was named for the Immaculate Conception.
The story we just heard from the Old Testament [Genesis 3:9-15, 20] highlights the serious damage done by Adam and Eve to themselves and to the rest of the world - and the damage all of us have continued to do to ourselves and to our world, through our alienation from God. Mary, however, holy Mary, represents the healing effect of God’s far-greater power, empowering Mary to say Yes” to God where Eve had said “No” – God’s powerful plan to save us from ourselves.


The story calls Eve the mother of all the living. In spite of sin, human life continued – the very first sign that God was not going to give up on us. Of course, the serpent still lives and continues his mischief, but his doom is already certain. Eve’s greatest descendant and Mary’s Son will strike at the serpent’s head and crush him.
When Our Lady appeared to St. Juan Diego in Mexico in 1531, she spoke in the Aztec language, Nahuatl (just as later on at Lourdes she would later speak not in fancy French but in the local Pyrenees dialect). The Nahuatl word, which to the Spaniards sounded like an already familiar title, “Guadalupe,” literally meant “Who crushes the serpent.”
God’s great plan for our salvation, the mystery decided upon from all eternity and hidden for so many centuries, has been realized in Mary’s Son, Jesus, and is now revealed in the life and mission of the Church. Mary’s holiness at the very beginning of her earthly life is also the Church’s holiness at its beginning and invites us to look forward to the Church as it will one day be in the perfect holiness of God’s kingdom.
O Mary conceived without sin, pray for us who have recourse to you!

Homily for the Solemnity of the Immaculae Conception of the Blessed Virgin Mary, Immaculate conception Church, Knoxville, TN, December 8, 2012
Posted by City Father