Servant of God, pray for us!

In his 2008 book, Why Go to Church: The Drama of the Eucharist, the recently retired Master General of the Dominican Order, Timothy Radcliffe, recalled how one of the first things the Irish immigrants did when they settled in cities like Liverpool during the Industrial Revolution was to build big churches. Radcliffe writes: “it was a sign that they were not as they might seem, mere members of the urban proletariat, but citizens of the kingdom. They were fellow citizens of the saints whose statues filled their churches, God’s own children. Their houses might be slums, but their home was heaven.”
Similar sentiments undoubtedly characterized the immigrant Catholic community that founded Immaculate Conception parish in 1855 and built our "Church on Summit Hill" – a visible sign, not just for them, but for the whole world of the Kingdom of God present and active here in East Tennessee. We come to our parish church to hear God’s word and to be fed from his altar. United around that same altar, we are then sent forth to announce the Gospel of the Lord and glorify the Lord by our lives.
So caring for the physical fabric of this 126-year old church is a key component of my job as pastor. This year’s project - replacing the church’s 19th-century slate roof – has just been successfully completed. Going forward, I look forward to phase two - the replacement of the church’s inside ceiling this coming summer. 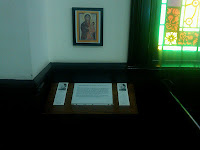 Inside the church, meanwhile, a special place has been set aside for prayer for the canonization cause of Paulist Founder, Isaac Hecker, and for the mission of the Paulist Fathers, as well as prayer for one’s own personal intentions (for which is provided a prayer invoking Hecker’s intercession). Displayed there is a copy of an ancient icon of the Mother of God, venerated in the the Papal Basilica of St. Mary Major in Rome, in the Cappella Paolina (Borghese Chapel) built especially to house it in. After his expulsion from the Redemptorists in 1857, Servant of God Isaac Hecker prayed before this image as he prepared to undertake his new mission which led to the founding of the Missionary Society of St. Paul the Apostle (The Paulist Fathers) in 1858. (The Paulist Fathers undertook mission work in Tennessee beginning in 1900, and have served at Immaculate Conception parish since 1973). Like the proverbial incense at evensong, may Hecker's prayers rise to heaven on behalf of those who invoke his intercession, and may the good work he began when he founded the Paulists contine in the fertile field of East Tennessee.